A double ride really fabulous! Before I ride my beast dressed for riding ... then, after a good dose of riding crop and trampling with boots and spurs, I butt-fuck him wildly giving him a truly brutal pleasure. I'll break his ass so that later, when I start to whip him again, he does not seem to feel the lashes!!!

Evening. Subdued light and romantic surroundings. The mistress again started entertaining with a slave. She carefully walked along it with her beautiful gait, stepping her legs in sandals over the lower body. With each new step, pushing the slave into the floor with her soles and heels, the Lady did it even more zealously. The moans of the lower one are heard, but he suffers, not asking to stop. The most patient and devoted slave, beautiful and strict Lady. What else is needed for a fetish like trampling?

The self declared son of a bitch is allowed to care for the feet and sneakers of Mistress Jenny and me. On the verge of insanity, the sneaker sole insemination is pending. Of course the slave has to clean everything with his tounge afterwards...

Elena sits on the couch and puts her beautiful feet on the table. Her feet in mesh socks and the slave begins to lick them. Elena watches the work of the slave and when she doesnÂt like something, she hits him on the head and pulls the collar. After the slave thoroughly licked her socks, he had to clean her bare soles. Elena's feet are very beautiful and wrinkled, she relaxes on the couch and moves her toes ..

ITALIAN SPEAKINGCUSTOM REQUEST - ''The story is very simple ... in your clips, often as set design I see a saddle resting on a tripod (as in the clip: ''What a beautiful pony'' ) .... I want this seat on the tripod, and that it was in the the center of the room with the slave crouched near it .... you comes in the room dressed as a rider (the look of What a beautiful pony is very good, adding spurs to boots) and using the slave's back as a footboard humping above it, ( it's important that you keep your feet in the stirrups and raised from the floor) .... in this riding position you get licked your boots and spurs by the slave and to stimulate her to lick better, you whip on the back .... the shooting video must focus especially on you sitting on the saddle (close-ups of your thighs and your buttocks while resting comfortably on it) ... when you are satisfied or get tired of slave, you will unmount the saddle (always using the slave's back to help you to get off) and you will exit the room on the slave as she were an horse (the best would be to use the seat on the slave if it's not too complicated). ''

Veterinarian Dr Ross in action.Mistress get the fat pig out of the cage to inspect. The sow is disobedient and needs upbringing. For mistress pleasure the fat slave pig is chained to the tree.sequel followsThe cool story is based on one in several episodes

Jimmy has been slacking on his chores, and Princess Taylor has noticed! she ambushes Jimmy on the couch, stuffing her work socks into his mouth and TYING THEM AROUND HIS FACE! When they are tight and secure, she sits on top of him and ****** HIM TO SMELL HER RANK SWEATY LITTLE FEET! Her socks are so wet and sweaty that even she can smell them!She takes off her socks and rubs her soles over his face, Cupping her toes over his nose and DEMANDING HE SNIFF! IN AND OUT! IN AND OUT! The video ends with Princess Taylor's POV as she harasses Jimmy's nose!

The stuff your wet dreams are made of!Cruel Reell and I lie in hot satin clothes on the bed in our hotel room. The shine, so soft, as our fingers play with the fabric, just everything about this clip drives you into an incredible horniness that you have never experienced before! As a satin lover you have to have this clip, there is no big talk, pictures say so much more than words.

You lost a bet against your roomie and now you have to keep the house clean for an entire week, but she unexpectedly comes up to you and says that there's something else you can exchange it for if you want. You're interested so you hear her out. She tells you if you can put up with her smelly socks and feet and loudest grossest burps for five minutes then she'll call it even. However, there's kind of a catch- you have to be shrunken during the girly torture.You agree and her fun begins. She starts off and burps really loud in your face, waves her smelly socked feet in your face, and then she shrinks you down. Once you're shrunken she places you beneath her feet and peels off her socks. She likes seeing you squirm in torture! It's so satisfying to her! To make it worse for you yet she has you come closer to her very linty, sweaty bare feet while also burping high above of course!And it doesn't end there. You're bug sized, and with how much she loves crushing bugs she wants to feel you under her feet... just a little. You squirm and struggle and you're tempted to run, but she says if you run that she'll add ten minutes to the torture- eek! You're very obedient and you put up with your deserved playful torture as best as you can for her.After that she lies down close to you, looks at you, and burps over and over blowing it directly at you. Phewwww! The more she burps, the more burps she feels coming up! To make it even worse yet, she brings her bare foot up to her face to make you smell her feet and her burps at the same time.Next she checks her phone's clock. Time's up! In fact, you did more time than you had to... but you know what? She loved doing this to you so much that now you'll stay her shrunken pet and if anyone asks where you went she'll say you've went off on vacation!

My toilet slave loves my filthy ass! He loves the stench of my sexy girl farts! He puts his face right up to my asshole and breathes my farts in deep!My toilet slave is so hungry! He is desperate for the sweet chocolate that slides out of my asshole! HeÂs so hungry for my perfect, delicious shit! HeÂs looking up at my big, juicy, shit filled ass. I think he knows my shithole is full of poop. My toilet slave is lying under my big poop filled ass waiting for my turd to slide out and drop down into his open, waiting mouth!

Marine Boot Camp and harsh training methods used by Tiger's Cave for wrestlers like Tiger Mask are nothing in comparison with the insane abs workout done by our super fakir! Here, he is with Marika, a beautiful strong girl (20-year-old and 144 lb of muscles and beauty!). During the first exercise session, you' ll see the fakir kneeling on the floor while lifting weights (a series of twenty): each time the weights touch the ground, the muscular Marika takes aim and throws a terrific body blow with her big feet. Twenty lifts for the fakir? Twenty kicks right in the guts by her! In the second exercise, the fakir lies down on the gym mat and starts doing crunches in a very odd way: every time he returns to the starting position, Marika stomps hard his belly. 20 times with her big soles, 20 times with the heel of the foot (ouch: it's so painful!). After the insane stomping session, in the third and final exercise of this stomach demolition routine, Fakir Ab - the fakir with abs of steel - does some push-ups: obviously, when his body is in the upper position, Marika kicks his belly: 20 times again... poor fakir!

Come into the bedroom with me and make yourself comfortable on the bed ... I'm just quickly going to grab something ;-) You don't mind if I bind your arms to the bed, do you?! Did you really think I'd have sex with an idiot, like you?! Surely not! With losers like yourself, I only play different games! Oh, it hurts, when I sit down on your face with these hard jeans? And you can't breathe anymore? Well, that's the fate of a human seat pad! And you'll never be more than a living seat pad for a woman like me - especially not in the bedroom!

I am modeling my bikini, stripping off of them slowly. Then I start playing messy games with raw eggs! I crush them on my tits and smear the stuff all over my body - tits, tummy, cunt!So messy and so sexy! My whole body is a mess and now it`s time to clean myself! No better way to wash that mess than a fresh warm pee! I pee in a glass bowl and after that I pour it all over my tits, tummy, cunt! What a turn on! Oh it feels wonderful indeed to have a pee bath with your own pee! 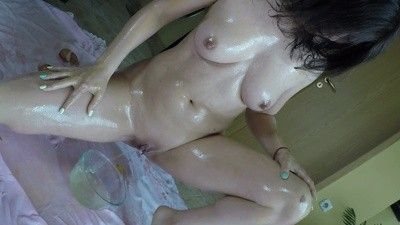 Sitting here at Mistress MeganÂs feet with his hands cuffed behind his back and attached to his leash, this submissive guy is absolutely helpless. And Mistress Megan just canÂt wait to get the best of his defenselessness! Watch her beat his boner with her feet, watch her struggle him down on the floor and piss on himÂ The way he writhes and squirms under her ass, fighting for air, is so pleasant!

In this clip you will jerk for Me and will show your devotion to M Pussy.Â I'll penetrate your mind and have you completely in My control.One more loop and you are owned and obsessed to My Perfect Pussy.

See me while im in a strange position on wc, just to be able to put my hand under my pussy and asshole and then.... i lick my hand after she takes pee and p-o, then so many FARTS so loud on your face!

(Custom Request)Mistress Alisha Bartlett is out for a walk on a hot sunny summer day, while you creep behind her! Drooling over her BIG JIGGLY BUTT! You watch it wobble back and forth as she walks down the street, dreaming of one day being under her!At the end of the walk she turns around and catches you, she could call the cops, but instead she shoos you off! GET OUT OF HERE PERVERT!