So, what did you bring today? A nice envelope filled with money? Let's take a closer look. But what the fuck is that? Only a few small bills? You should know that I'm not used to receive "change" ... 50 EUR bills are acceptable, but 10 or 20? Really? You're a real idiot - cause now we've a problem. I told you about that new bag I want - but this few bucks won't be enough. So, you know what you've got to do. Get some more money for me or I'll tell everyone what a loser and wimp you're and press my dirty shoe soles on your face. Get going!

Custom clip:Clip is entirely zoomed on the hand.Wearing some rings, i will crush : 2 bananas,2 eggs,2 tomatoes,2 lemons and 2 cucumbers.I only test my strenght with cucumbers and lemons,as i cannot fully crush them.

The customer service representative in clear stockings and shoes with sexy straps sits near the desk. The film has two shots, one from the back and the side of the chair. She moves her legs around and crosses them. Her assistant walks in during filming. She walks him to the door. 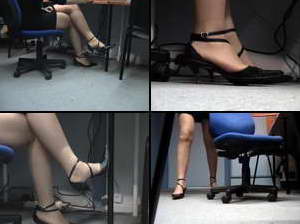 Giantess Jade knows you really like seeing the soles of her feet and what she can do with them. But she also knows your ultimate fantasy is to be squashed like a bug beneath them. In this video she teases and torments you about your fantasy using her sexy bare soles. You get to see POV shots of her feet coming down on you and face shots of her looking down at you. At the very end she counts up to 10 before grinding you into the carpet and crushing you beneath her curvy bare foot!

And once again this pathetic slave is granted the honor of feeling my sexy ass on his face. Unfortunately - for him - I'm wearing tight hard jeans and don't go easy on him. He's getting my full weight on his face and I nearly crush his nose under the hard jeans - but he's a such a comfy chair!

The tiny men are enjoying a lovely weather afternoon.Little do they know that Giantesses Deeane and Gloria have just entered the city.The massive booms that shake the ground with every step the huge women take is making the little men start screaming and shaking.After briefly examining the city,Deeane and Gloria split it in half,Gloria goes to the right and Deeane stays in the left side of the city.Aware of her strenght,she grabs a little man and crushes him under ber boobs.Gloria is running and scaring the little men in the other side of the town.Deeane lifts up a man,but drops him between her fingers and crushes him under her foot.Amused,she does it again,Gloria wants to learn how to do it too and she comes testing her new skill.

18yo Russian girl Jessica throws the poor teddy into the snow and drives over it again and again. In the end she stops the wheel directly on him, applies the handbrake and burns out the tire on him!

Angelina's hot grey jeans is already lying on the bed as she wants to put it on today.She gets into the jeans with one leg first and then pulls it up with her hands as she sits on the bed. To get down to her feet better she lies down on the bed and sticks her legs into the air. Then she pulls up the jeans so it fits her body very tight. Then she gets on her knees and presses her hot butt into the jeans as well. Then she gets up and pulls and pulls so her sexy ass fits her jeans perfectly. She's proud and lets you adore her jeans ass.

Bridget is under a lot of stress due to some problems at work and home. she contacts her therapist. Her therapist has some special technics when it comes to stress. He uses tight bondage to relieve his patience from the tough everyday stress. Bridget is tied up tight in many different positions and by the end she is left stress free. This is a great bondage film! 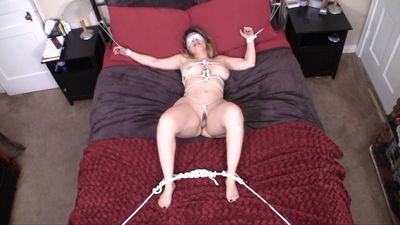 It's a lazy sunday afternoon and Breanna has nothing better to do than to sit on the ugly young face of our 18 y.o. boy while reading a magazine.

"Wow, guys in here are way cuter than you!" she says insulting him while sitting on his ugly face as she browses by the pics of hot guys! But the insults don't stop there! "you're so skinny and ugly and pathetic! At least these guys have something going for them!" she says, unlike him who has nothing going for him in life except being sat on and used as a seat by the hot girls of our studio!

"Having trouble breathing? Yeah, that sucks doesn't it!" -Breanna 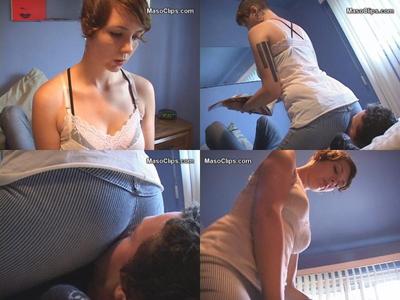 Niles begged and pleaded for his life soooo well that it almost makes Katelyn want to give into him. She tells him no. The reason she has little tiny shrunken slaves like him is because she has a sexuality and a hunger that involves her eating tiny little slaves his size for her happiness, pleasure, and consumption. The game is predator and prey. She explains how the predator might feel a little bad for catching her prey and the process of a Giantess listening to her prey beg, scream, and plead does sometime convince her to stop. But no. Katelyn is strong and has never backed out of eating her prey. She MUST feed.

Katelyn then explains something about food to her little shrunken prey. Thankfully, she has food too which allows her to balance her meals. Just one shrunken person a day satisfies her hunger and food takes care of the rest of the meals. However, she MUST feed on at least one shrunken person a day. And it wouldn't be fair for her to release him and choose another after she's already made up her mind, now would it. No, that would not be fair to the others. The others are very joyful that it's not their turn yet.

She then goes through with it. She holds little tiny shrunken slave Niles high above her huge wide open mouth and tells him to say the last words of his life, high above her mouth. After her spine chilling last words to him she then drops him into her mouth. She lies back on her couch and squirms in pleasure while rubbing her belly. Her hips sway back and forth, by the looks and the sound of it you can tell how satisfied eating him has made her.

Katelyn continues to talk to him even after he's been eaten. She can feel him sliding slowly down her throat! She moans and groans in pleasure as she pushes him down her throat even more! She then no longer feels him in her throat any more and moans some more because that means within minutes, his little tiny life is going to be nothing more than a snack for her body.

I've been out Riding ALL DAY LONG & my Riding Boots are so DIRTY!.. I want you to lick them like the loser that you are.. get down on your knees & lick them clean BITCH!.. show me that you actually serve a purpose & that I have a reason to keep you around loser.. LICK them CLEAN!.. your nothing but my lil boot slut & this is your job.. stick that tongue out & get to work.. NOW!!!.. I want my dirty riding boots clean bitch!.. start with the tops of them & lick the bottoms too.. you need to lick EVERY speck of dirt off them!.. OH & I'm going Riding again tomorrow & I expect you to wait on your knees til I get back & clean them AGAIN tomorrow too SLUT!.. It's your ONLY Purpose in Life.. You better do a good job or I'll kick you in the fucking face BITCH!!...

Have you ever been the passenger of a car driven by a pretty girl wearing open toe platform sandals? Did you wish she would use your cock & balls as her gas pedal? If you answered "yes" to these questions you're going to love this clip! Joe is helping Megan with her driving lessons so she can pass traffic school to get her license back. She seems to really enjoy using his privates as a gas pedal & could not care less that she's causing him pain in his scrotum & damaging his testicles. His cock & balls are completely trapped under Megan's big sexy sandals & really begin to hurt from all of that hard pumping. She pumps his nuts super hard with her big platform sandals & tells him to shut up & take it! Megan pumps, stomps, mashes & completely pulverizes his jewels with her sexy platform wedge sandals. She loves crushing his nuts with her big heavy heels! "I'm going to pump the cum out of these balls!" - Megan tells him as she's mashing his testicles to a pulp! Megan continues to pump his privates hard - despite the fact he's in pain & squishes all the cum out of his nuts with her big sexy sandals! 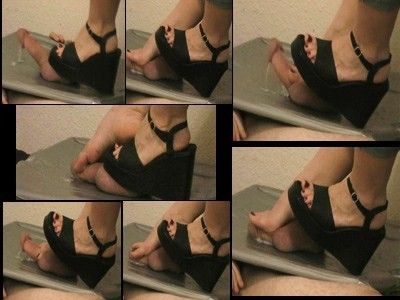 I ordered my slave to get the dirty dog bowls into the dishwasher but he is so damn slow and stupid - he didn't even understand how to turn it on - ridiculous! Of course i couldn't let him get away with this without a proper punishment so i ordered him on the floor and smothered him under my ass - maybe next time he'll do a better job and get away without a punishment!

I had a real bad day before I made this video and made sure my slave feels even worse haha. I start by kicking and stomping his nuts hard with my high heel boots - and my mood got better with every kick. Later I took off my boots and continued to trample, kick and stomp his groin under my bare feet.

Mistress Daemona de Lucca loves to have her slaves helpless. Today she will give her house slave a tight bondage. She wears a beautiful latex dress and thigh high boots. Her slave is dressed in a latex overall with only a cocks opening.First she teases him by steping behind and stroking his nipples and his cock and balls. Next she takes the bondage rope and ties his hands and arms. See how Mistress Daemona enjoys seeing the slave getting more and more horny...Mistress Daemona de Lucca uses more and more ropes to give the slave a bondage, which he can't escape. Finally she ties his balls with a small string and starts to play with his cock...Mistress Daemona de Lucca is now in the mood to controll his breath. She connects a flexible tube to his gas mask and regulats the amount of air that flows through the tube. The slave is absolutly under the spell of his Mistress. She teases her poor slave to the max. See how she plays with his nipples and his cock! The slave get puffed, because the gas mask still limits his breath, but Mistress Daemona doesn't stop her game until he comes...Finally Mistress Daemona removes all the ropes with a statisfied smile on her face. The slave still gasps for air a little bit.

Lady B crush a RC-Car unter her beautiful Feet and Heels. First she standing with her full bodyweight on it, after she crush him under hard steps.