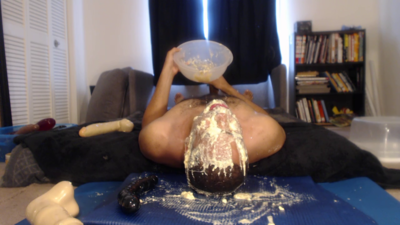 My ass always makes you weak,but today you are in my captivity! My sexy ass drives you into madness and makes you completely crazy.Shape of my Perfect,Sexy,Powerful Ass takes control over you completely!

In her Home Office corner Sandy has Feetslaves lets Sandy hers spoil all day long her feet under the table. While she is working above bobby needs to massage her feet under the table and kiss. And sometimes it devotes itself to whole it like now, too. It lays out it its slave collar around, the cord fastens to it and draws for it thus quite tightly against its foot. So can check it beautifully where bobby licks its feet and in which speed.

As a smelling slave nothing has to laugh for Richie with his young mistress Lea; Because she still must go through some documents, her slave also shall suffer in the meantime; She ties him up with handcuffs to the trick armchair; He must lie motionlessly there, during him Lea puts her forgotten feet in stockings on the nose; He must smell strong to this; And as he lies below so there and all the time pulls her foot smell up, Lea does not notice him at all. It smokes a cigarette pleasurably and reads its script.

The Slovakian foot mistress Alissa trains Oskar foot deliciously to hers. She sits on the couch and has her naked feet kissed and licked for herself by him.

My slave will eat my shit again. He is very well trained and hungry real human toilet. He adores me and is ready to obey every single command. He is going to kiss my feet and thanks me. After that he is going to eat my nasty shit and lick my ass clean while I face sitting on his mouth.

The Scatqueens are not done yet with the toilet slave. He was so looking forward to the shit, and wanted to eat everything. He now has the opportunity. A second pile of shit falls into his toilet mouth. Piss and snot are free, hahaha. Well, is probably a little too much shit. Then he has to stuff everything in his mouth.https://www.yezzclips.com/store750

Lady B wants cut the lawn. She is wearing her hot Pants and high heel Wellies. She start her lawn mower and Begins. She destroy thereby one pair of high heel Pumps. She walk simply over they and run with her mover over it. The Pumps are completely destroyed now. She take tractor and have fun to destroy Pumps and Boots with her tractor.

In this movie all the time there is shit, the biggest shit ever! hard, rare, but always tasty.! Time for your meal, you will get it straight with my ass. Do you see fresh tasty poops? They are all into your mouth! I have prepared a warm, nutritious dish from inside me for you.

Richie lies to feet of Fetish Lady Xenia. With the cord she holds him tight at his collar and he stretches her naked feet into the mouth. It very deeply slides its fine lacquered toes for him into the mouth. He must suck at it and suck every toe one by one.

A great view from the bottom and Petes Hands under my rough rubber boots.You will hear it, they are painful!

Good afternoon, my dear shit eater. Today I start collecting shit for a scat party with my slave girl. I will assemble for three days and you will see it in my videos. Oh, how I want to get shit all over my slave girl and have dirty sex in shit.

I've been wanting to do a mummification session for years, so imagine My excitement when My new slave told Me he was up for the challenge!! He came to My dungeon with a huge roll of plastic wrap and I wrapped him all up in it, totally mummifying him! After he was nice and secure, I put him up against the wall and spanked him with one of My favorite wooden paddles - in fact, I whacked his ass so hard I broke the paddle!! After that, I laid him down on the floor and tickled his feet with My long nails!! He claimed he wasn't very ticklish.... I put that to the test! Then, I tormented him with some FACESITTING.... his tiny little dick was trying to burst out of its chastity cage while he had to endure My perfect ass on his face while unable to move! Finally, to make things even more exciting, I called My hot Alpha Male partner into room to give the slave some CUCK torment!! My partner sat down on his stomach while I was still on his face, making it even harder for him to breathe, and then We made out on top of him!! Finally, after We had Our fun, We left him there, lying on the ground, still wrapped up, and just walked away!!

9385 - Crushing his hands under tires and heels

I took the slave to a dirt track and order him to put his hands on the ground next to my car. I walk over his hands with my sexy high heels a couple of times and enjoy how he squeals in pain as the sharp heels and hard platforms hurt his hands. But I've something much worse planned for him today - something that's really going to make him scream in pain! I shove his hands in front of my car's tire - and then get into the car and start the engine. The slave's shaking in fear as he sees my heavy tire moving towards his hands - and then going across them! I drive back and forth over the slave's hands a couple of times - then get out to inspect the damage - by walking over them a couple more times! Of course, now that they're bruised already it hurts him even more, but that doesn't stop me from running over his hands for a last time before leaving him behind! This is a non-exclusive custom clip for a fan. If you want me to do a custom clip for you, send me an email to marissa@madamemarissa.com!

Mistress Antonella is so pretty with her black PVC corset, her black PVC trousers and transparent stiletto shoes.She is going to offer to her slave a very nice Caviar meal and Champagne drinking, but she explains to her slave that, after he will eat her caviar and he will drink her Champagne, he will lost his balls by chemical castration because she had eat a special poison and between the combination of her caviar and her Champagne, he will be eunuch for ever. So it's the last choice for him...Her slave can't resist to eat this wonderful meal from her Mistress, and he eats her Caviar dinner and he drinks also the Mistress's Champagne. He swallows all the caviar of her Mistress and drinks all the Champagne.After eating this nice meal, he becomes to lost his balls by chemical castration. And from now, he becomes to be a toilette eunuch of Mistress Antonella for all the rest of his life...

the new high heels of my Paypig have arrived. Reason enough to make a video and cast a spell on you as well. Unique are the feminine movements, as the beautiful women's feet with the heels are one. In this video you can admire my feet, my movements and playing with the heels from very close and enjoy the moment of interaction.Enchanting this sight. Then you can also send me new high heels loser. 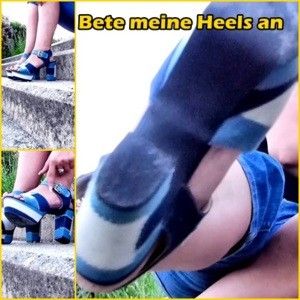