Karate Kiki is sitting on the couch with a good book in her hands. In a few minutes her new boyfriend will come and get her, so Kiki chooses to accentuate her sexy thin body in a very tight black dress, black stockings and high heels. Suddenly her attention is captured by a series of disturbing noises: a masked thief is looking for valuables in her bedroom. Karate Kiki takes off her shoes, she moves like a cat, graceful but lethal, in the direction of the perceived danger and she catches him in the act. The furious girl gives the robber the beatdown of his life. For the first three minutes she uses the thief's stomach as a target for the entire repertoire learned in seven years of karate. Then she slams him on the floor and begins stomping and trampling him mercissely (always on the belly, stomach, solar plexus). With the thief on the ground, totally unable to rebel against this sadistic lesson, Karate Kiki stands full weight on his bruised abs over six minutes. A video for those who love black stockings, karate, young female fighters, hard trampling and real beating (although very though, our actor asked us four times a break, due to the lack of breath and unbearable belly pain). 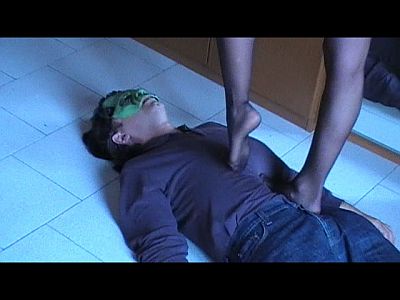 Mistress Mara got lots of trampling experience and she knows exactly how to use her weight and her sexy high heels to hurt a man a lot! She steps on her young bound slave's body and tramples his body under her heels - but she has planned so much more for him. She jumps on his chest next and causes her slave to scream on each impact - only to step on his head with her full weight only seconds later. The hard soles of her shoes almost break the slave's jaw - but the heels are way worse! After this devastating high heel trampling she decides to be merciful - and takes her shoes off. But anyway - this trampling session continues to be really brutal as Mara immediately starts jumping on his chest again. She finally gives him a severe head trampling before she takes off and leaves him - and his pain - alone!

As you all know, you can buy my steaming sausages at the biggest worn underwear portal. Here I once again had a very nice, firm sausage for a customer in my belly! 130 grams of brown fun .. that was worth it!

Lola is walking in her really sexy red stilettos. She is showing off her hot shoes and her high arched feet. She is posing with her sexy stilettos. Great close ups.

In your dreams, you want to be humilated by a divine blonde dominant lady because of your undersized minicock :D lol ?o love to laugh about an useless minicock-loser like you and i love to humilate you, because with your undersized minicock, youre good for nothing and so i let you feel this very hard and hurtly in this video! after this, you will know where youre place is lol :D !!!

I'm on vacation and I have to take a really big poo while I'm next door shopping but they don't have a restroom so I run to Dollar Tree next door and almost don't make it to the toilet but I do. I take a really nasty messy yellow poo that smells so bad I feel bad for the person that comes behind me!

GirlsLikeSpit - Kira sits on the couch and wears some sexy pieces of clothing. Through her tight top you can easily see her hot breasts ? and her transparent panties let see you more from her pussy than they hide...! In addition she wears a pair of black boots. She spits on her boots so they glare only because of the large amount of spit soon. All the spit which landed onto the ground will be rubbed with the soles of her boots. But she also likes to play with the spit in her mouth! In a close-up view you can watch the saliva running through her lips while she plays and spreads the spit with her tongue. A lot of spittle runs along her cheeks and drips to the ground. There are also some long threads of spit between her lips ? That looks tasty, doesn't it...!?

This is the only clip (so far) of Miss Kimmy getting Her ass smooched - lucky loser! She encourages Her slaves, saying, "good bitch" and "good boy". The first slave gets to remove Her sneakers, while She says "open up" so She can insert Her sweat socked foot in his mouth.She makes sure both slaves feel violated, having their mouths fucked w/Her pretty bare feet.

When I told Avery how "good it feels" to have nuts smush under my pretty barefeet.. She couldn't wait to try it! lol.. I told her that whenever she comes back home from a nice long night of dancing at the clubs.. Or if her feet are aching from being in stiletto heels. There's nothing better than to kick off your shoes & walk barefoot all over some losers nuts. "Feeling them squish under your feet is the best massage EVER!" I tell her. So we take off our shoes & walk all over its balls & crush them.. Avery really gets into it too & tramples them beyond repair! lol

little worm you disturb me at work.It occurs to me however that it would be nice if you would me my beautiful feet at work applying lotion and massage.

48567 - Pathetic Submissive Gets Chained and Rained with Piss and Shit! - Part 1

She made him lick her bare feet to show him who's boss. She rubbed her ass on his face and made him respect the cunt. She videotaped the whole thing for her sick and kinky pleasure.

Sexy sultry Canadian wife Brookelynne Briar just isn't satistied with your little cock anymore... nope! You've come home early so you can watch her get ready & dressed to go out & pick up a nice big black stud to fuck. She loves teasing you with the details of how that big black fuckstick is going to feel inside her tight white pussy as she shakes her perfect booty in your face as you kneel helplessly before her. She's salivating with anticipation at finally feeling satisfied with some thick dark meat since you're pathetic & can't do the job. If you're lucky, she'll come home to you when she's done. 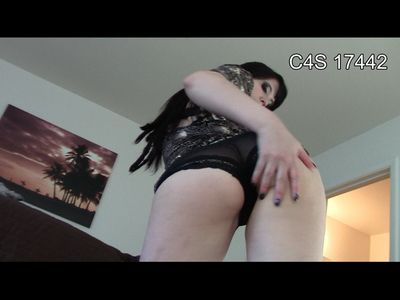 This a therapy session for all guys who have a no comun glove obsession.Wecome to Comunity Therapy Clinic.Im Dr Celine.Since this is your first time here I'd like be begin with a short interview.For this session to work your need to be exposed and vulnerable both mentally and physically. Go ahead and sit down and relax...try to be as honest with me as you can with your answers. Next, tell me about one of your favorite sexual fantasies. Don't be embarrassed, this interview is completely confidential. I just need to know what I'm working with...give me as much detail about your fantasy as you can

Lady Bella kicks and squeezes her slave the juice out of the penis. he groans and moans, but she knows no mercy and strikes repeatedly pulls his balls long and is clearly amused by the suffering her slave

Monica looks like a cute little angel behind her glasses and her smile but it seems like she really loves and enjoy to dominate this loser slave! He is kind of her whipping boy! She also likes the idea of our sweaty socks challenge and it seems like she also knows how to win them! She has worn the same pair of white socks for about a month now just to make sure he won?t survire more than thirty minutes! The rules are pretty simple: This loser slave will now have to deal with her sweaty socks in his face for the next sixty minutes or she gets a two hundred dollars bonus! Monica explains the rules to her slave just to make sure everything is clear and gives him the call to take her sneakers off! She immediately covers his face with her dirty white socks and starts the chronometer just to make sure there is no cheating! The smile on her face tells a lot! She knows he won?t be able to win that bet! Her white socks are too stinky! You will now deal with my sweaty socks in your face for the next sixty minutes! Monica also takes pleasure to make him lick the dirty bottom of her socks! She loves to watch him suffer with his nose in her feet so this challenge was a real cakewalk to her! Very Hot Clip!

This sweet little teddy was sent to me by a fan - and it's going to be ripped apart by my sexy leather boots. I start by just trampling all over the teddy - but as I get more and more into it I start to use my heels to rip it apart more and more. I severely kick and rip it until the fabric gives in and rips apart - his head and legs are torn off and the stuffing is spread all over the floor when I'm done with it!This was a custom video for a fan - and the teddy in this clip was provided by him. If you want a custom video as well, send me your fantasy by e-mail to marissa@madamemarissa.com

Come on! Go down on your knees and kiss my feet to greet me! Get down - NOW! And where is the money you promised me...? Give it to me! Hmm... I have to check and count the money first - because I don't trust you! But you don't need the money anyway - I can spend it much better! You are a loser only! It's unbelievable - but it's also true!! And now, get down on your knees again and kiss my divine feet!!