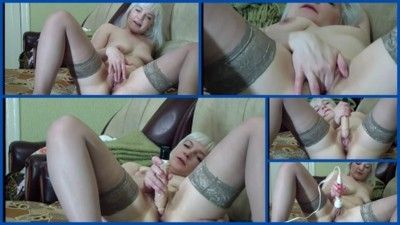 Liberty loves to dominate and it shows again in this clip where she sits on her slave to punish him with her smelly feet! That was a long day with her shoes on so she takes them off to completely cover his face with her sweaty white socks! The smell was crazy! She rubs them all over his face with her devilish smile and makes him lick them! She also makes him take some deep breaths in her shoes! Liberty needs more attention on her feet so she makes him take her socks off with his teeth and pushes them into his mouth with her toes! She makes him sniff her smelly bare feet and stick his tongue out to lick the sweaty bottom of her soles! She also loves to feel his tongue in between each of her toes!

Milf Mistress Norma Jean: Every lady needs a foot licking slave! I lure the foot slave to me by holding out my bare soles and playing with my toes. The foot slave crawls at my feet and I order him to lick my bare feet. His tongue is supposed to slide from my heel to my toes and wash the soles of my feet with his mouth. My toes have to be sucked extensively and I watch the game with pleasure. You should also lick my soles, that's why I let the slave lick a foot and I hold out a bare sole for you. I need 2 foot slaves at the same time. Licks my feet foot slave! Lick, lick, lick!

This object came to me today to apply for my slave stable. What could be better than to test him right away for his services as a bootlicking slave? He may also prove himself as an ashtray when the mistress smokes her cigarette with pleasure ... I love it when my objects make themselves useful with their tongues on my rubber boots ...

I have already told you for a long time that my slave girls, after eating shit and after having dirty sex, walk around the house all day in shit, do household chores. And so, I put the camera on and you will finally see that this is true and how it happens. My slave husband, cooked us delicious borscht for lunch and my shit-eating Maya and I, all dirty in shit, ate it with pleasure, devouring it for both cheeks. Maya is pregnant and she needs eating well, so after eating shit, she also ate plate of soup

Two dominant red-haired girls Kira and Sofi have teamed up again to jointly humiliate one slave. The submissive guy was wrapped with a rope, shackling his hands and put his body on the floor, and his head on the sofa, face up, so that it would be convenient to spit in his face and mouth. And now, without unnecessary preludes, the cruel Mistresses began to spit continuously in the face of the slave. Sadistic girls spit in a slave's eyes and nose and on every inch of his face. Sofi also orders the slave to open his mouth so that she spat at him. Young Mistresses scoff at the slave and verbally humiliate him, and when they saw that the slave closed his eyes, they began to deliberately spit into his eye shells, filling them with saliva. The face of the slave, completely covered with saliva of the two girls, is shown in close-up for you to see for yourself.

Only after the slave has suffered properly will Mistress Zora be happy with his condition. She kicks him to the ground and puts her legs around his neck. Caught in her leg scissors, the slave tries to find a way out of his predicament but Mistress Zora keeps in trapped in the most difficult positions. Which one makes him suffer the most?

Mistress Maria: Suffer from my pussy and my ass. A new way for me to dominate the slave is by sitting on his face and taking the air to breathe. I sat down with my big ass on his slave face and enjoy the feeling under and in my ass. I press my pussy in the slip on his nose and it sinks deep inside me. His face is covered with my pussy and ass. A great feeling. Suffer from me, suffer from my weight, suffer because I close your mouth and nose with my ass. Haha. Nice to have a slave face as a seat.

Blond long hair and black tight clothes (leggings and a top) - this is how the tattooed Goddess Agma looks today. Since Agma has had a personal slave for a long time, he is already trained in how to serve his Mistress. Therefore, if the skinny Mistress goes to the balcony to smoke a cigarette, the slave immediately takes his place - the place of a human ashtray for Goddess. The slave sat down on the cold floor and lifted his face up and opened his mouth turning it into an ashtray for Mistress Agma. Blonde Domme only once drew attention to the slave as a person - when she ordered him to give her a cigarette and light it up, because in the future she ignores him using him simply as an ashtray by dropping cigarette ashes into his mouth. Narcissistic Agma calmly smokes a cigarette and flips through the news feed in her smartphone, distracted only by chipping the ashes into the slave's mouth and sometimes exhaling cigarette smoke into his face and mouth. When the cigarette is finished, the Mistress puts the cigarette butt in the slave's mouth as in an ordinary ashtray.

Roxy makes the slave lick and clean her dirty summer shoes. She tells Alex lick her black pumps with straps very thoroughly as well as it's soles and heels. When the slave is finishes with her footwear Roxy orders him to take off her shoes and lick her sweaty bare feet. Roxy's feet are wet and salty but at the same time a very sexy. She also makes Alex lick and suck her toes and between them.

144468 - Your beloved inflatables crushed under my high heels (small version)

Again so many of your beloved inflatables found their way into my living room ... the inflatable animals, the giant unicorn island, rare air mattresses and a bunch of little balls and swim rings ... all completely at my mercy ... or my heels' mercy! And you know my high heels are merciless ... and not a single one of your inflatables will survive the next minutes. The sharp thin heels of my shoes dig into each air chamber and destroys them. Sometimes they leave a small hole ... maybe you can even patch it ... other times, they just rip the inflatable wide open and destroy the inflatable beyond repair. I know this sight almost gives you a heart attack, doesn't it?! But at the same time, you love it, don't you?!

Lana uses christina for the first time .. She heard a lot about her from girls .. She was told that christina licks dirt and dust from shoes better than anyone else, so Lana decided to test her. Lana walked down the street all day and her sneakers got really dusty. But it's okay, the slave girl is nearby. Lana ordered christina to clean her sneakers with her tongue. When christina licked Lana's sneakers, her tongue turned black with dust and she constantly swallowed it so as not to smear the dirt on the sole. Not such a stupid slave girl .. Of course, Lana wanted to humiliate the slave girl even more, she pulled out her sweaty insoles and began to wipe them on christina's tongue. "Swallow all the dirt and sweat that you licked off my sneakers and insoles .. Now you will lick my bare feet" - Lana ordered and the slave girl started to worship her feet. christina cleaned Lana's bare soles, not forgetting to lick between her toes. She wanted to please her new Mistress. When Lana's

Only after the slave has suffered properly will Mistress Zora be happy with his condition. She kicks him to the ground and puts her legs around his neck. Caught in her leg scissors, the slave tries to find a way out of his predicament but Mistress Zora keeps in trapped in the most difficult positions. Which one makes him suffer the most?