These jeans are really sexy and Mistress Sabrina is wearing them especially for her slave. She sits herself down on his face, taking away his ability to breathe. For how long? As long as he can stand being under her ass! First she sits on his mouth and nose with her legs apart, squeezing his nose flat. It's very comfortable for Mistress Sabrina, but no so much for him. How mean! However, she lets him take a breath before sitting down again, completely smothering him. She begins to count. How long will the slave be able to hold his breath for? 1... 2... 3... 4...

Again a nice movie with 2 kinky Goddesses, each of them with a different style of humiliation, from using slave as human ashtray till using as full toilet ! Great scat action and smoking. 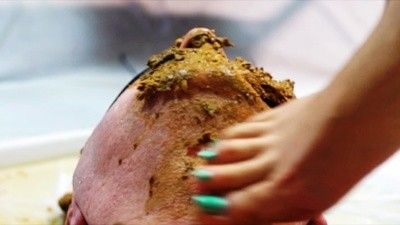 My longtime house slave and servant went his own way and now I'm looking for a new faithful slave, who reads the wishes in my eyes. You can apply, but of course you have to meet certain criteria to serve me. Humility is probably number one. You should be happy that you can clean and shop for me. You have to serve at least once a month for a weekend and a maximum of four times a month. Your tasks will be diversified and if you do everything properly, I will use you as my video slave as well. Here you should also be versatile. Do you dare to serve me and become my dependable slave? Watch this video and decide if you want to take the next step and send me an application.

Join Live as the foot slave sweats under those wonderfully playful ballerinas. A colorful mix of trampling, dominant head trampling, throatstanding, facesitting awaits you! See how the lady in leggings and ballerina not only intensifies the spitting, but also boosts the strength of the slaps! Breath reduction by choking or intense tickling make the lady laugh! Of course a shoe kiss after the cockstanding must not be missing. Even the foot slave smiles

Reverse Facesit. Back in the day Lady Ashley was going to facesit a local friend but he moved out of the area before it could happen. After bumping into him in-town, she demanded that he visit her later that day... to catch-up! Lady Ashley was looking forward to putting her butt on his face. When he moved before that could happen it drove her wild! Unfinished business will be finished today!

Helen uses her slave to work in her office, but on the first day she is already punished. Yza made the report all wrong, so Helen ordered her to crawl at his feet and then licked her heeled shoe, then she ordered him to remove his shoe and start to smell his socks, they were sweaty. Helen was in two different socks, the first stocking was black and the slave smelled licked. The second stocking was nylon 7/8 she ordered it to smell and lick, and then she removed the socks and introduced it into the slave's mouth making her smell and taste her socks at the same time!

Do you have a fetish for this little balloons and have much fun with them? Then watch how 2 ladys in sneaker pop up balloons in many different ways.If cannonball or facesitting boom you will just know if you click on this spectacular clip.

Goddess Liana likes his face best when she doesn't have to see it, so she covers his ugliness with her ass. The slave would rather leave, but it's time for some very hard facesitting. Lady Liana is a strict and sexy facesitter and doesn't let herself get irritated by his wriggling. She is relentless in using his face as a seat cushion! Which is just as well seeing as there's no other use for it. Could you endure being in his place?

Alisa felt like she needed to relax and rest her feet after a very long day with her sweaty socks and feet inside her sneakers, and she also thought it would be nice to take advantage of her slave since he was almost sleeping in her feet while she was watching some cartoons on the laptop. She asks him to take her sneakers off, then immediately covers his face with her sweaty white socks! She just takes pleasure to rub them all over his face, and makes him take some deep breaths in her socks. She also makes him lick the sweaty bottom of her socks, and makes him sniff the inside of her shoes, while she is just relaxing and watching her cartoons! Alisa also makes him take her socks off, and smothers his face again with her sweaty naked feet! She makes him takes some deep breaths in her feet, and makes him lick the sweaty bottom of her soles! It seems like she just loves to take advantage, and rest her sweaty feet on his face after a long day!

ITALIAN SPOKEN This slave was caught again jerking-off instead of working and he knows that is going to be punished. His plea to be spared the whip is useless and makes me even angrier. He definitively needs an exemplary punishment and that is what he?s going to receive: a long hard whipping which won?t spare any portion of his body. I?m not going to stop when he can?t take no more but only when I?ll be too tired to continue!!!

Reverse Facesit. The perfect Valentine's Day present is Lady Ashley's round ass and warm pussy having a seat on a face! She loves making her slave gasp for air from between her cheeks and then covering his face back up with her deep ass! It's true; Lady Ashley's heart-shaped butt sliding across a face is perfect!

My ass was very full this morning, cause yesterday I ate a lot of food to fill the slaveÂs mouth. He was already waiting for me in the toilet and was impatient. I shit directly in his mouth with his lips sealed to my asshole, sucking my shit out, but the shit was too big and creamy for his mouth 😉 so nasty, but entertaining nonetheless. I don't care, he is just a shit hole, my toilet hole! There is some bonus for you filthy toilets as well. You can see what you can never have - my shit covered my ass - is your dream meal.

What am I gonna do with all these cans?! Oh yes... There is me nevertheless something hot in mind! I love to destroy things. I like how it cracks under my feet loudly! These empty cans are perfect for it! Now there is a loud can crush party! Watch me do it! I step with full power on the empty cans and it crashes under my sneaker in itself. That looks breathtaking and sounds outstanding! I love how I destroy everything under my feet! Do you love it as much as I do?! Then look at me crushing the next can. This time I do it very slowly and especially painful. I put more and more weight on it until it lies completely flat under my foot. And that was just the beginning!

The shy lady walked to my room and pulled down her panties, which smelled faintly of piss and vinegar. She mustÂve have been wearing her panties for days now. In her forties, the womanÂs anus was full and round, which meant she had been keeping her shit in for a few hours and was about ready to explode. She bit her lip as she pushed out a large wave of warm fart that sounded like tiny bike horn. Her anus began expanding insanely, twice, thrice its size as the massive turd escaped the confines of her rectum. Her shit smelled like days old meat mixed with vinegar, too. It was massive, a dollop and a half, and it splashed wetly on my face before I began swallowing it piece by piece. I love wet dollops of shit, theyÂre tasty and easy to swallow, and I can smear them on my slave skin all day long.