Katelyn lost waitress her job, which she's been loyal to for years on end, to forgetting to clean the soda and ice dispenser. However, Katelyn can see right through her boss. She knows the real reason she got fired is because she's well past due for a raise. And for that, she shrinks her ex boss and brings him home to teach him a lesson.After a good old lecture she figures that if she gets rid of her boss that no one will know she was fired. She fittingly tortures her boss with her drink and then drops him in and gulps the drink and him down. No one knows she was fired so she'll now get to keep her job! On top of that, she's been with the restuarnt the longest and no one will be there to take over as her ex boss has no close family or friends. She fantasizes about how easy it would be to convincingly take over ownership of the restaurant and change it as she see's fit!This video features a waitress theme, a shrunken boss, and drink vore!

In this video - really disgusting indeed - we tried to please everyone who loves spits and pre-chewed food. The star of the clip is the young Sarah, a beautiful student of the University of Essex. In front of the camera - always fixed on her - Sarah chews an entire ham sandwich, spitting all the semi-liquid mush in the mouth of our (lucky or unlucky?) actor. For eleven long minutes he must swallow all what Sarah has for him: a lousy mixture of bread, ham and saliva... a very hard performance even for an iron gut: eating sweet food pre-chewed by a beautiful girl is not so difficult, 'cause sugar can almost obliterate the strong flavor of saliva, while other kind of food - as a sandwich for example - isn't able to do it: on the contrary, the salty food intensifies the nauseating taste of drool... our skilled actor can assure it: eating all was not so easy even for him! 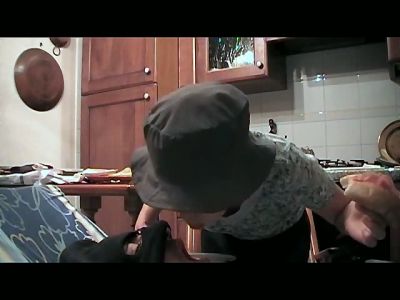 Professor goes in retirement. His body is also broken by our girls. Candy has a collar for her pet professor. She wants to have him for one more time. Just for her. His mine... All mine... Candy enjoys in humiliation and faceslaps

There are 12 clips in this download. We have set the price at the lowest Yezz Clips will allow, so you can be sure that you won't find a better deal this Christmas!Clips in this download include:After my run comes diarrhea,Birthday Blow out,Shitting in my Bongo jeans,Can't stop even for the bathroom!,Daisys day of shitty bar tending,Damm it come on all ready!,Doing it in my white pants,I guess I wasn't done yet!,All this shit and no where to go!, I love a shitty enema,Locked out with the runs!

79404 - Rather pay quickly, paypig otherwise I'll get my money personally from you ...

As every month have you and all the other pussies to pay their wages here to me! Fortunately, there's plenty paypigs like you, for you know: I want to see money, money, money !!! 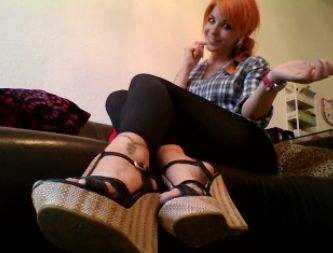 I lay on the bed in her underwear, and I feel that he wants me to sleep. I love yawning, that feeling when my mouth is open very wide, when you see my teeth, gums and tongue.

SCARLETTE is not your regular store manager, she's a proponent of brutal methods (to say the least!) to keep employees in line. In this clip she viciously whips (with 2 whips!!) the lousy slave-employee, letting the whips fly and crash again and again on his bareskin with a loud snapping sound while she verbally degrades him in the process. There's no boring moments with this intense and gorgeous Mistress as she brutally punishes the slave until he can't take the pain anymore.

Olga is a blonde brat girl and she likes peeing! She sits down naked in the edge of her bathtub. There she spreads her pussy lips and allows you to watch her pissing a strong yellow ray of pee!

In her bathroom Katrinusic wants to try something completely new today. Many of her girlfriends have already told her that it is a terrific feeling to wear wet jeans. In the shower she quickly checks the temperature of the water, and then the game begins. And it's true - it is a fantastic feeling! She sits down on the rim, letting the water run over her jeans. It takes her breath away how good this feels!

Just look at me and my sexy Victoria Secret underwear! I'm sure I can fuck your brain in an instant! You cannot concentrate anymore and lose your control! Only few minutes before I had sex with my lover - and he has such a big dick! Not so a tiny weeny like your mini! :D You will never be able to fuck me with such a thing - but you can watch me being fucked of course... :D

Next actionpacked clip starring superbeautiful goddess empress victoria and her funny dressed masked worshipper! the mistress is dressed in leather from head to toe, wearing beautiful sandals with metal heels. the slave is ordered to kiss her shoes, lick her soles of the shoes, suck on the high heel...of course everything under the control of the lady and every lack of effort or every lack of obidience will be punished at once. either with her red riding crop, or with a slap to his face or with a hard pressing with the heels into his genitals. but...the slave is not bad at all...so he is allowed to worship her more and more...

Custom clip:You strip out of tight faded blue jeans, t-shirt, bra and full back panties. The viewer must be in a chastity device. You do a full back panty/bikini bottom show but during most of the video, the viewer only gets a "side view" while changing out of each panty/bikini bottom. 3/4 of the way through you show your bottom in full view as you change out the last pairs. You SLOWLY and gently shake your behind left to right. During the entire video, you tease whether or not the viewer will get to cum to your beautiful booty. So in other words, he's not quite sure if he'll get any release. You then allow him to take the chastity off as you slowly count down from 20-1. (every so slowly and seductively swaying your hips left to right) During the countdown, he STILL doesn't know if you'll reach "1" and let him cum. It would be nice of you if you did though;). When you speak, it's never fast..or really too slow. Just very direct and intensely seductive and cockteasy. So see the concept here. The viewer is in utter sweet agony because at first, he cannot stroke. And he doesn't get to see your full butt till near the end. And the shear heartpounding unknown if he will be able to release to your sweet bootay. 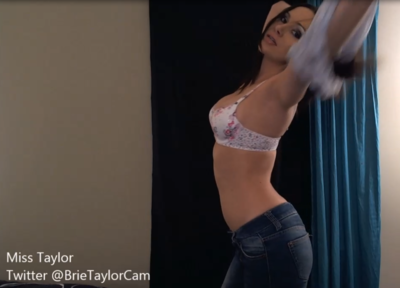 Goddess Bianca and Goddess Victoria love to spend time together. There is chemistry between them. They like same things and love to enjoy them together. But the best time is always when they have a slave bitch to clean their high heel boots and inhale all the smell from sweaty pantyhose. It's his job to obey any command while the two chat and have a good time.

What is the greatest passion of Mister Apnea? Bare Feet Sniffing, of course! He simply loves to inhale the wild and cheesy scent of a female foot. Yes, the aroma of dirty socks is pleasant. Yes, pantyhose too can smell intensely. Flip flops, boots and sneakers can produce toxic odors indeed, we know it! But nothing compares to the wonderful smell of a nice pair of feet... totally naked! At the end of a hard session of weight training, Alessia lies down on the bench and gets some rest, leaving her feet, closed in putrescent sneakers, at the mercy of Mr. Apnea. Our fetishist hero tries to remove them - it's not easy to follow out this operation because Alessia's feet are sweat and sticked to the inside of the sneakers - and, finally, he begins to sniff all the smellable surfaces in a professional way: the heels of the bare feet, soles, toes and toenails... A lustful paradise of strong smells :) 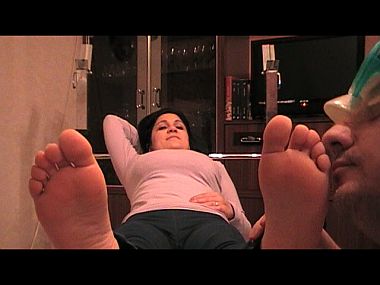 Stella wants to make bondage on Lisa. Lisa is lying on a bench. First, Stella bind the legs with tape together and then she fixed Lisa`s body and arms with tape and Nylons on the bench. Now Lisa can not move. At the end of this clip, Stella makes Nylons Lisa mouth. So she fixed Lisa head even with the bench. Now, Lisa can not move and speak anymore. Nice close ups and great tape-scenes.

my fun on the toilet! I pressed the belly, comes ! strong, big and loud! mucus from my pussy is thick, white and slippery, you can see it up close, feel it! I thoroughly wipe my ass!

Custom: you found out your husband has been sneaking out at night having affaris and cheating on you.so you spike his drink momens lates hes knocked out bound handfucffed gagged in a cage or chained to wall whatever you perfer.in the bathroom. its completly dark. you walk in few seconds later , you explain you know everything and how he wll be in here forever and how he will never able to cheat on you again. you knw your good at this add humaltion degrate him you spit at him make him drink up your golden necatr what ever works for you. and at the end you basically give blow him a kiss goodbye tell him have a nice life and you turn off the lights and shut the door and lock it

Second part of this TOP video, now there is the scat moment, italian caviar directly in the slave's mouth. Don't miss it. MP4. This video is abouth 30 min. Really low cost for u. Mistress Isabella. 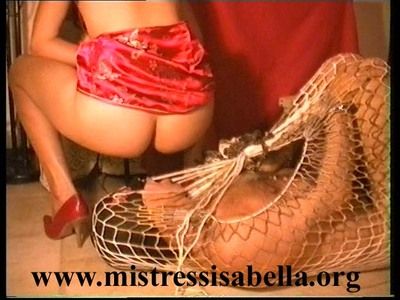 Our store is called ItalScat - the name speaks for itself - but people who work on this stuff quite often adore all toilet games, pissing included. So, this is the second of four clips of pee drinking that we propose (with different mistresses and various slaves). As the Wise man says, natural remedies are always the best. They are usually more effective and safer. What to do when your nose is blocked up? Many people recommend doing warm steam inhalations: you have to put the water to boil, then pour it into a bowl, adding a small vial containing chemical essences which can be potentially awful for our health. In this video, on the contrary, I try to unblock my nose with the help of my dear friend Alessia (and, especially, with the ammonia of her pee). What is more natural than sniffing the warm piss of a young and beautiful female friend? So, I asked Alessia to piss in a bucket. Then I poured her hot nectar into a cup and after having provided an improvised blanket (held by the same loving Alessia) I started to inhale deeply bitter fumes coming from the basin. After two minutes of strong inhalation, I wondered if I would have had the guts to eat cookies soaked in the piss, and drink all the yellow liquid of the bowl. I thought it was a simple thing, but as you will see in the dramatic final sequence, it was terribly hard: I almost puked!