Goddess Kinsley shows of her beautiful long legs with stockings. Her beautiful round ass and sexy legs are ready to be worshiped while the mistress admires herself in the mirror.

So you like big, beautiful women do you? Well, in that case, Miss Deviant has a special treat for you!In this hot custom, Miss Deviant tells you she has designs on becoming the fattest women in the world. And you're going to help her make it happen.You'll be feeding her up, watching her belly grow, her ass getting bigger and her tits getting massive as she refuses to lift a finger.Being fat and lazy is the dream for both of you. You want to worship her ever-growing body. You dream about fucking her. And she dreams about being able to tease you with all that flab you're dying to get your hands on!

Lady Alice and I will degrade you into a 24/7 slave servant. Someone who will always be at the service of two alpha women! You will be humiliated, used and degraded. Oh, and we will start by giving you a Prince Albert piercing. Do you know what this is? With this piercing there will be no more fucking or jerking off. You will only serve! Do you want to know what else we have planned for you?

Goddess Sheila: After the slave has licked my dusty beach shoes clean, he can now clean my bare feet with his tongue. He has to lie at my feet and stick his tongue out as a washcloth for my feet. I rub the soles of my cute little feet over his tongue and let him suck my toes. A foot slave has to worship my feet and clean them with their tongue.

Sitting on my throne, I call the slave. His job today will be to smell my sweaty armpits and clean them with his tongue. While performing, I exhibit my biceps as a sign of superiority and strength. I feel the tongue of the slave and it seems to me that of a puppy. At the end of the work I spit in his mouth and now he has another taste of mine inside him...

Goddess Sheila: After the slave has licked my dusty beach shoes clean, he can now clean my bare feet with his tongue. He has to lie at my feet and stick his tongue out as a washcloth for my feet. I rub the soles of my cute little feet over his tongue and let him suck my toes. A foot slave has to worship my feet and clean them with their tongue.

I can tell you have a little dick. I see guys like you drooling over my perfect sexy body, and your little cock has always been too small to please. Girls like me don't fuck little two finger jerkers like you, we only want big, juicy, thick cocks that shoot huge loads. That's why nature made you a little pindick, natural selection means that you were always destined to be a hand humper and drool over me.

Wearing only her panties, this woman is given an enema, but only with a small dose! However, it is enough to cause her to defecate on her underwear along with some chunks falling on top of the stool underneath her! She then later sits on it to create a big mess by smearing it all over her buttocks! Eventually, she stands up but only to be given with another round of enema, this time, a lot bigger! As soon as her rectum is filled, she takes a seat on the stool again and then gradually releases the contents out of her asshole! As a result, with every passing second, the filthy mess gets bigger and wetter! When she could no longer release any more, it is then that she makes things more interesting by repeatedly pounding her butt on the feces-covered chair!

Today potty you will kiss just for a bit my high heels because the urge to shit makes me shit a bit in my panties wich i take it off and show them to you to lick them clean and after i pee a few drops in a glass and shit an creamy shit pie wich i arrange it nice and feed it to you by fork with an amazing view at my divine breasts enjoy slave! 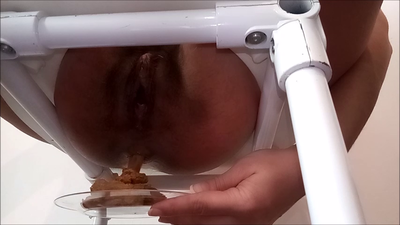 You like it, don't you? My hot ass fucks your brain! Unfortunately, you're just a loser - and the only way you'll experience this ass is, when your face is used as a seat pad! The hard jeans flatten your nose, and the smothering makes you panic - but you'll endure that for the pleasure of seeing my ass up close, won't you?! Real men would obviously experience different pleasures with this butt, but for losers like you, it only brings pain and humiliation. Let's see how long you can take it, loser!

15 minutes pure giantess crushing actionPrincess Alena: Do you dare to go under my Skater Vans? Do you want to see what I'll do to you when you're very small at my feet? I'll crush, trample and wipe you out. You will become my victim and I will kick all hope of grace out of you. You know to be my victim, nothing! Your existence will end under the soles of my Vans sneakers. Sacrifice yourself to Princess Alena.I enjoy dominating my slave under my bare feet. If I could I would trample you and others under my feet. In this video I show you what I will do to you when you are at the mercy of me as a victim. I will wipe you out from under my feet and end your existence. I will crush and trample you. Check it out and get in touch with me so that I can get a real victim under my feet! (Incl. ultra slow motion video

The girls are wearing high-heels. One is wearing winter shoes, the other summer ones. They trample over a guy on the floor. They are wearing sexy mini-skirts and stockings. The whole time they try to stand on his chest and then his hand. Time 6.38 min. Remastered - movie from 2007.

Bella has been walking all day in her sneakers on a hot summer day so she thought it would be good to relax and rest her feet a bit. She calls her slave into the room, and makes him bow down on his knees to make him worship her feet! She makes him take off her sneakers, then completely covers his face with her sweaty black socks! They were actually super sweaty, and the smell was really intense, so she just makes fun at him, and rubs them all over his face! She makes him take deep breaths in her socks, and makes him lick the sweaty bottom of her socks too! She also enjoys making him sniff the inside of her sneakers, and makes him lick the inside of her sneakers too! It was so intense since her sneakers are so old! Bella also makes her slave take off her socks with his teeth, and simply shoves her dirty socks into his mouth with her toes! She makes him sniff her stinky bare feet, and makes him lick and clean the bottom of her cute little feet too! Bella is just hot as hell in this clip where she totally takes pleasure in humiliating this loser slave!

Raven is on her hands and knees, cleaning your kitchen floor and she's so bored. Lucky for you she doesn't mind you watching. ÃÂ Even luckier, she likes to show off for you! You wouldn't mind letting her leave a little early if she cleans in only her knickers, would you? What if she slips down her panties and gives you a good view of her pussy? Do you like that? You should pull out your cock and wank it - she doesn't mind. In fact, she encourages you to do it.ÃÂ

Goddess Sheila: I'll let you lick my beautiful high heels clean today. You will clean every inch of my high heels with your tongue. I want you to lick my heel and clean my soles greenish. You will always lick my shoes clean before I leave the house in the future. Do you like your job?

When a real slut is deeply fucked with a cock that looks like a horse one he can even orgasm straight from his ass. It looks impossible and yet that's what I decided to show with this video !!! ItÂs clear that several and cock strokes turned this slave into a greedy slut and now he finds himself having an ass that works exactly like a pussy. After I completely opened him with the power of my mighty cock that reached the deepest points of his ass, I started fucking him with increasing violence. On the other hand, when you have a monstrous beast like mine between your legs itÂs difficult to control and contain yourself and the instinct is just to grab the slut by hips just like a real whore in heat and sink repeatedly without any mercy until you feel completely surrender the walls of his ass. I can easily feel that there is no more resistance, the slut is completely opened and almost ready to squirt. Shortly, before reaching anal orgasm, the slut starts moaning like a real obsess, the cock seems for him the only reason for living and he becomes practically insatiable and, while his asshole is screwed with incessant cock strokes, the slut starts to stiffen. It's time to insist and fuck him with great skill. His ass is now starting to throb rhythmically and the slut foam just like a whore until he squirts in a hurry eager to want more and more. However my friends are coming and now they will take care of exhausting him completely. I'm really curious to see if this attitude can become a new game with which to entertain all those who will come to visit me from now on ...