It's winter, the temperature is below 0 Celsius outside and Megan felt this is a great time to walk her dog slave outside. He's totally obedient and Megan owns him absolutely. He's on all fours walking in the cold, his hands are freezing and Megan is laughing at him, stepping on his hands and he just wants to dry. But he can't because she would kick the soul out of him if he would be weak.Megan loves to torture slaves like this. She's wearing her winter boots and nice coat so she's not cold at all but her boots...they got a bit dirty. The slave will have to lick them clean. He does as he's told. It would have severe consequences if he didn't. It's a good thing because now Megan can go shopping and she can be sure the slave dog will stay in place, not running away. She'll be back in hour or two so stay! And he really stays in the cold for almost two hours, freezing, suffering but it still better than the alternative. When Megan is back she realizes the dog must be thirsty. Here's a puddle, drink from there! She makes him go on the ice, steps on his hands and he has to drink the puddle water. That's a good boy. Perhaps Megan will keep him and not kick him away. What a lucky slave dog.

I am your Goddess Dream. My Perfect Ass is your absolute favorite conduct.You become weak, I want you to be mine and idolize me and my hot ass!

Today it will happen: The real wanking torture: I will jerk your slave cock. Over and over again. And then again. And again. I'll let you jerk and then countinue... 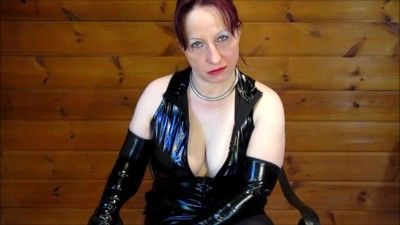 Would you like to see how I spent my last vacation? You can admire this charming body in a bikini on the beach and by the pool. As you can see, I enjoy my vacation to the fullest, which was paid 100% by my slaves, by the way. That's the way it has to be! You now have to pay for my next vacation, loser.You can get the low quality version on my onlyfans profile!

Let me be clear slave. You don't get real pussy, need to worship me with wank worship today so I know I said in the past you get a pussy free existence. My princess pussy is not for you but today I am permitting you to wank with a fake plastic pussy. Wow, such a treat for you, be grateful that I am being so kind today. I know a guy like you is a sexual reject. No real pussy for you jerkaholic loser you are forever sexually rejected. Instead, you just wank worship to my clips. That's your sex lif

Inside the bathroom, the two naked women no longer waste any more time and begin taking turns orally pleasuring one anotherÂs pussy! With every passing second, they get more intimate and aggressive!

When I came home, my slave must lay on the floor and i was peeing in his mouth, he must drink my pee. Then he must be on his knees and lick and suck my asshole. When I came home that day from party, he must clean my shoes with his tongue!

I have a big date coming up and I want to make sure it goes well so I let you have a peek into my top secret pre-date getting ready ritual! I'm wearing some gorgeous champagne satin high waisted vintage inspired panties and putting on my favourite red lipstick while I explain that a woman's scent is very important. Perfumes are complicated things, especially when you consider how they interact with our natural pheromones and other smells. I like to smell nice like a perfume but with a little something different behind the smell - the scent of shit lingering on my skin. To achieve this effect I take a huge pantypoop the shower - leaving just the smell! I start to push it out and you can hear the loose mushy shit make loud squirting sounds and farts and crackles and sputters. The wet load starts to seep through and stain the fabric as I change positions several times to really get it messy. Eventually I sit down in the tub to squish the shit - it oozes up and out, coating my pussy and bush with shit and as I lean back it crawls all the way up my whole butt crack and out the top of my panties - even though they were high cut! After taking them off and showing you the mess, I turn on the shower and let it run over my shit stained ass and pussy - perfect!

Your life is so boring and pathetic, no woman in her right mind would ever be interested in you loser! Much less a gorgeous, powerful Goddess such as myself.Open your wallet and give Me,till last penny.All what you have on your account!Don't hide anything from Me! Obey paypig!

This beautiful view of a goddess makes it much easier to open your wallet and fill mine! I?m enjoying my vacation to the fullest while you?re working for me. As a good paying slave, it is your duty to finance my luxury. So, it is time to finally start, paypig! Pay and obey!

I had the urge to use the bathroom so badly. Ultra high quality and great lighting in this video. You see the poop come out and I show the toilet paper after IÂve wiped. I then show an upclose in the toilet and flush.

In her dungeon the Gimp Pebbles is sensually deprived as The Goddess and Her TV aid enter all his holes with fingers, cock and strap on

I am about to prepare a new super yummy treat for you to eat. I know how much you love thinking of my sexy ass, so IÂm going to let you have a taste of my dirty ass. My pussy has been wet thinking of making you a dirty treat straight from my ass. I pull up my dress and push out a big creamy shit. Tootsie roll candies are so yummy as they are, but I thought I would make them taste even better for you by rolling the candies in my hot shit. It pleases me to know that your will get messy just unwrapping these scat treatsÂ.lick your fingers up good and enjoy all the scat tootsie rolls that I made for you,my toilet, yummy, Worship all of my Goddess ass!

13323 - The Present of your Wife and Mistress:(german language)