A femme fatale (Goddess Celine) is a mysterious and seductive woman(so true) whose charms ensnare her lovers in bonds of irresistible desire, often leading them into compromising, dangerous, and deadly situations.A femme fatale tries to achieve her hidden purpose by using feminine wiles such as beauty, charm, and sexual allure. In some situations, she uses lying or coercion rather than charm. She may also make use of some subduing such as latex gloves, sexy legs, sensual lips . eyes..Her ability to entrance her victim with a spell was in the earliest stories seen as being literally supernatural; hence, the femme fatale today is still often described as having a power akin to an enchantress, seductress, vampire, witch, or demon, having some power over men.Whats Goddess Celine's secret to kill her victim today

As an exception this clip will be a bit softer than usually! I know exactly that you have been watching me, that you have been purchasing my clips and jerking off to them! I know that you have been lurking around on my profile and that you haven't had the balls to contact the one and true Goddess, Goddess Mel! This clip will convince you finally to introduce yourself to ME and to pay for me and my luxurious life like a good drone always does. It will be your goal to pamper my feet and my soles in REAL time, loser!

I tie up my slave on the bed and I put ball gag to his filthy mouth. I was thinking what can I do with him when he was so defenseless... I will streaching his ass... I know that sissy slut love when I put my toys into his butt and fuck him hard. So I use my fist to punch a plug in his ass to make him suffer. When my slut squeal to much I learn him to be quiet whipping and slapping his big ass. I step with my feet on toy to move it deeper into his ass hole. At the end I use my toes to streach his pussy. He had peace of my body in his ass... He must to be grateful his Goddess for that pleasure...

Brainfucking extraordinaire! Yes, slave, you know that there are few moments only when you are allowed to watch me in a sexy outfit like this one, so better use your chance immediately! Today I'm going to reprogram your brain! I will put a trigger deep into it and you cannot do anything against it! You are mine! You belong to me, I am your mistress, Lady Amy! Listen to my words, worship me! Give me all your patience and even more...! You cannot live on without me and you know it already...!

Look at all those little cars - barely the size of my toes! Let's see how long they'll survive under my sexy new wedges! One after another gets to know the crushing power of my giant body - gets to feel my full weight for a little while before it's crushed to dust under the hard soles. Some of them are slowly ground to pieces, others are stomped flat quickly - but there will be no survivors!

Rebecca looks for something in the shelf unit in shiny rubber boots. Suddenly she notices that a slave is doing nothing and only drinking. So she attacks him with her boots and impels him to kiss her shiny boots. Then she dings him down from the chair and goes slowly upstairs and her slave licks and worships her wonderful rubber boots on the way on steps.

98920 - Crushing strawberries on the glass floor

Now I'm going to crush these strawberries with my sexy bare feet - but since I'm crushing them on the glass floor you get to see it from below as well. Watch as my powerful foot soles squeeze and crush the little berries one by one and turn them into a messy smoothie!

Aqua is a new flower, strange and pale like hell. Her deadly aqua beauty is so mistic to me. Someone will adore her, someone not. Your choice. Sonny is here to teaches her and make the things more interesting. Also, a new guy is here... Full weight face sitting by Aqua. But this guy literally drawns in her ass.

Today is a festive day for the Mistress ... Today opens the toilet chairWhat better way to inaugurate except through a beautiful and abundant crap in the face of a toilet slave? The wonderful Mistress Giorgia Divina first makes a big leak in the face to the slave and then covers it with shit. In the end Mistress spreads across his shit in the slave's chest.

Empire Strikes Back isn't the only sequel worth watching. Extreme Foot Worship turns into a series with a bang, again in SUPER DETAILED UNBEARABLE SMELLY FEET, fresh out off FLATS, SNIFFED, LICKED CLEAN and CUMMED ON. Lucky SNIFFBOY's face now smells FUNKY for the rest of the day. It's like those good movies that stick with you after the credits.

Lady Victoria has her maid at home. She shows how she treats her maid. The real cleaning maid serves and obeys. Lady Victoria puts on her shoes, and makes the maid realize in which way she has to serve the next time here and spits her a few times into the mouth, so the servants and maids simply obey better.

You will be totally ignored and used, just like you little loser love it most, haha. Lick the soles of our shoes and take care about our sweaty and smelly feet. But even for this you are too dumb, so that you will get some heavy faceslapping.

For this finger trampling I wanted to use the glass floor again - this way you can perfectly see how much pressure there is on the wimp's fingers :-D The slave is clearly terrified when he sees me stepping on the glass floor wearing a pair of high heels with thin metal heels - and soon the fear will be accompanied by pain. The hard soles are tough on his fingers - but the heel is far more fun! Then I take off the shoes and continue to trample his fingers under my nylon feet. I want to apply as much pressure as possible and try to stand on only some fingers with my full weight. In the end I even try to stand on 1 finger with each foot only and almost break his fingers :-D

I slept. My girlfriend wants to wake me up. But I do not want to get up. I want to write. Most can not stand. I'm starting to write directly into the bed through his jeans. Now all of my bed very wet. 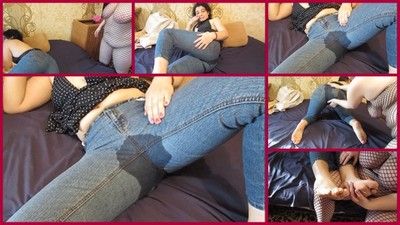 I feel like I need to torture my slave face with my high heels. I put my heels into his ugly eyes and nose. I spit on his face and order him to choke when I put all my heels in his throat. Sometimes I feel a big requirement to put my heels into his mouth and scratch his palate very badly but I'm not so cruel so just tease him. If he give his Goddess satisfaction I let him to worship my heels and sweet feet.