Really like something unusual and extreme , itÂs a beautiful day I went to the river , and decided to record a video for you Â I see big pile cow shit and really wanted to shit and I undressed, took off my swimsuit and began to shit under the bridge . Not far from me where I shot the video there were people and they were watching me when I shit , I show you my sweet hole after shit and you should lick it clean with your tongue Â You will see detailed close up review of my delicious shit. Eat it up, babe! I hope you like my videos and you want more debauchery and extreme.

Melady comes home and is livid: It had to cover the whole way home barefootedly because the shoes which Richie has bought for it have got broken; through this, of course her feet got strongly dirty of the street dirt; The dirty feet of the street dirt with the tongue clean leaky and as a punishment for this impudence Richie must for it. And he must meanwhile still all the time of it put up with verbal humiliations and insults.

ENGLISH SPOKENMany slaves say they want to eat my shit and come to my dungeon for that purpose. Some of them give up as soon as I make them smell my shit; others can receive my shit in their mouth, but cannot swallow; very few can ingest two or three bites when I feed them. But the most difficult thing for a toilet slave is to feed himself with my shit, without being helped; probably 1 out of 50 can do that.The slave of today told me he wanted to do right that; let's see if he can keep his promise. I shit in a plate; it's a mountain of shit!! seldom I produce so much shit!!. For the slave it won't be an easy task. I present him the plate full of shit, telling him that I will let him go, only when it will be completely empty. He slowly starts eating; once in a while he seems on the verge of throwing up but he can resist. He eats slowly, very slowly, but without stopping. I piss in a glass, so that he has something to drink too. It takes half an hour and, finally, the plate is empty. This slave deserves to be officially appointed full toilet slave!!!

My feet are placed on the face of the slave, I stand on his face with my full bodyweight and take his breath away. Before the little wimp knows what has happened to him, I give him hard kicks and knee strikes. As that gets too boring for me, I drop my hot ass onto his body with full ******. That is so much fun!

A perfect double domme movie with Goddess Luna and her friend ! First the slave was used by Goddess Luna for a facesitting session, combined with feet licking, ass sniffing, farting, smothering, then on a toilet slavery session with slave drinking Goddess piss through a funnel. After Goddess Luna finished her sut, she send him to her friend and he was mummificated again and humiliated ! This is a movie you must have it, only from here ! 2 of the best romanian dommes !

Breathed through the mouth. I suffered pain.My hands were tied behind my back. I was lying on a narrow piece of wood. My face and my nose were tightly covered with a garbage bag and duct tape - I could only breathe through my mouth! At first, Kristina beat me hard with a thin whip, my entire chest was covered with marks from blows, but I could not bear the pain and didnÂt scream, I wanted Christina to be satisfied - it helps the girls to relieve stress. After 15 hard kicks, Christina said she wanted to piss. At first she used my mouth for urine. I only breathed through my mouth, and the shit was soft, almost liquid, but I can't swallow the mistress shit without permission and I had to suffer.

Again I am followed by him, he does not leave me alone and wants to jerk off again on my ballerinas. After a phone call with a friend, whom I told about it, I followed her advice and let the wanker wank after a Wichscountdown on my ballerina. Nevertheless, it has served me in the end and in anger, I cut the ballerina and his cock. Hopefully it will have an end with the ballerina junky. 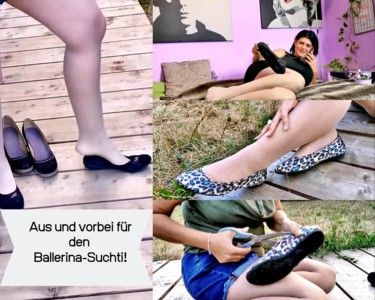 This human toilet is begging me to be used as my toilet.Finally in my presents he had second thoughts. But I needed to go real bad and no way I am using a cold toilet bowl.So I put toilet bowl on his face, coerce him to open his mouth and make him swallow it.He begged me to do it again!!! But with another woman!

I just shat on my slaves this morning. And again, want to shit. Oh, what a diarrhea I have. I didnÂt make it to the bathroom. I had to shit right in the middle of the room. Like a lot of shit, have to clean it up with your hands. What a pity there was no toilet slave. HeÂd eat all that shit.

So you wanna be mine, huh?You wanna be one of my toys?The first step, of course, is to lock you away in chastity.But don't think that's it - I enjoy chastity VERY much and I like to play games with my chaste subs. I detail one particular game VERY graphically in this clip. If you think that's something you'd like to try, then by all means, enter the penis prison...you won't be let out for a long time...

110053 - Crushing his hands under tires and heels (small version)

I took the slave to a dirt track and order him to put his hands on the ground next to my car. I walk over his hands with my sexy high heels a couple of times and enjoy how he squeals in pain as the sharp heels and hard platforms hurt his hands. But I've something much worse planned for him today - something that's really going to make him scream in pain! I shove his hands in front of my car's tire - and then get into the car and start the engine. The slave's shaking in fear as he sees my heavy tire moving towards his hands - and then going across them! I drive back and forth over the slave's hands a couple of times - then get out to inspect the damage - by walking over them a couple more times! Of course, now that they're bruised already it hurts him even more, but that doesn't stop me from running over his hands for a last time before leaving him behind! This is a non-exclusive custom clip for a fan. If you want me to do a custom clip for you, send me an email to marissa@madamemarissa.com!

The slave is ridden in the office by 2 mistresses in jeans shorts.The human pony must be taught how to trot and how to carry riders around on his backs. They chase him around and give him harsh cracks of the whip!He is used as human chair and kissing their feet

Lying on the ground under Jacqueline's chair Richie of the young Hungarian must kiss and lick the feet, suck their toes from the boots and extremely forgotten freshly.

His wife is nothing but a sultry little bitch, and the guy knows it. Watch him get subdued by the tanned bombshell who has him on a leash and between her lovely buttocks. Then, her hung, more able lover shows up, and the pathetic hubby has nothing else to do but serve her feet as she's getting a serious face fuck. Pretty soon, he's urged to lick the lover's load off his beloved wife's tasty cunt.

Alisa has a bad mood today. She orders me to lick the soles of her sneakers. It was a very unpleasant, humiliating feeling. But how could I disappoint Alisa? I immediately carried out her orders. After that, Alisa ordered me to smell the sneakers inside. It was very strong smell of sweat. Then I began to sniff and lick her sweaty socks and Alisa put them in my mouth. She didn't miss the opportunity to insult and slapping me many times. After I started kissing and licking her sweaty feet and soles. I tried but Alisa didnÂt like it and she pressed me to the floor with her sweaty feet. From time to time spitting at me to humiliate even more. Lying on my belly in front of her, I licked her feet and toes, as Alisa commanded me. I tried to lick all the sweat from her feet. I think I did it. But Alisa was unhappy with me and in the future I'll see new humiliations from her. (English subtitles)

Lea claims to read spoiltly to be during this at her feet; Therefore Richie must put himself on the ground and take care of it; It takes off her shoes and starts to lick their naked feet; The heels and soles of the foot lick off and kiss, suck the toes and massage simultaneously with the hands; Lea ignores it completely; She remains completely relaxed lies on the bed and her book further reads.

Bobby orders her slave to lick her marvellous leopard boots Giant Kim. With his slave tongue bobby needs to polish its patent leather boots fine cleanly on knees in Leo optics. After that she lets herself of her Feetslave bobby from the varnish leopard boots heraushelfen. Her feet hardly are from the boots, she orders him to lick at it. Bobby must now kiss, lick and suck between her toes the sweaty naked feet of the half Asian.