Nicole and Selena like to smoke on the balcony in the evening .. and they constantly use their slaves as human ashtrays. Today, the human ashtray is this Asian whore. Just look how pathetic and disgusting he is. He sits naked, with his mouth open, and swallows the girls' ashes and spits. Nicole and Selena laugh at his insignificance and decided to put the whole ashtray in his mouth .. there were about 10 cigarette butts .. and maybe more! That's disgusting.

Mikaila and Nina both like to make fun of you all the time, so it was just another hot day where they both wanted you to kneel in front of them just to take good care of their feet after walking all day in their boots and shoes! Mikaila takes her boots off, then Nina takes her sneakers off, just to give you a little smell inside their boots and sneakers! They take pleasure in covering your face with their stinky socks after that, and make you sniff the bottom of their sweaty white socks after wearing them for over a week! The smell is actually really strong, but they want you to smell them, and just enjoy the strong smell of their socks! They also want you to lick and clean the bottom of their socks, before taking them off to cover your face again, but this time with their smelly bare feet! Mikaila and Nina make you breathe deeply into their feet, and make you lick and clean the bottom of their soles too! You will also have to suck their toes, like a good devoted loser slave! Are you sure you can fit four smelly feet in your face? I can say it is something very intense!

My patient is addicted to me and would endure any treatment for me. Although he has never heard of dilator therapy and has never tried it, he willingly puts his virgin urethra at my disposal for my doctor games. After the first dilator slips into his hole, I blindfold my patient. Then I undress until I am fully naked and fuck my victim more deeply and extensively into his piss hole. He can only endure this because I also massage his cock and glans with every dilator thrust. Unfortunately, my poor patient has not the slightest clue about how perverted his doctor really is: Not only do I stick the small dilator into his virgin unstretched urethra, but larger and more daring rods are also used, which - thank Goddess - he does not see, but only feel.

Trampling a dick on glass. The girl weighs 55 kilograms. The girl is wearing bright sandals, she stands on him in wide heels and soles. Time: 8.08 min. REMASTERED - movie from 2003.

Nicole and Selena like to smoke on the balcony in the evening .. and they constantly use their slaves as human ashtrays. Today, the human ashtray is this Asian whore. Just look how pathetic and disgusting he is. He sits naked, with his mouth open, and swallows the girls' ashes and spits. Nicole and Selena laugh at his insignificance and decided to put the whole ashtray in his mouth .. there were about 10 cigarette butts .. and maybe more! That's disgusting.

Just two sweet girls who love to get kinky!My sub needs to be punished badly! That's why I order her to stick her ass out nicely for me and count every single blow. She enjoys the spanking at least as much as I do! Then it's time for the flogger and my sub's pussy has to endure a few strokes as well. In the end, her ass is nicely red, as it should be! As a reward I kiss and stroke her <3 We have so much fun playing together!Miss Medea Mortelle & Muriel la Roja

This is the first part of a custom video that someone has had tailored exactly to his wishes. Write me if you want a personalized video too!I know that my black painted toes are driving you crazy. If you want to see them, you'll have to submit to me and realize that you're a miserable foot sucker! As my bitch you have to obey every single order. After I have pointed you to your rightful place with my words, I take off my delicate heels and command you to look at my feet. While your gaze clings to my divine toes, you become aware that you have finally fallen for me. I'll make you my toe sucker and my useless foot bitch, because you can't serve any other purpose for me.In part 2 of this custom video I make you even harder aware of your submissiveness: In this clip you have to place yourself under my asshole and continue to serve me with your submissive mouth...

You want to watch me contort myself into amazing poses while wearing nothing at all...? You will feel so much more than arousal when you watch me do yoga ;) Sublimate your sexual energy now and see what your goddess practices day after day with her incomparable body. 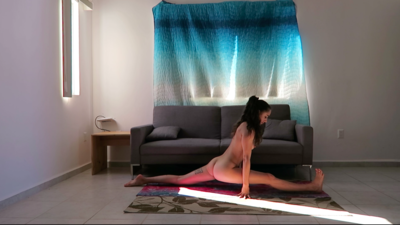 I know very well how to use your money. Learn what ethical findom is and which dreams of mine will become reality with your tributes. I dare to say that my visions set me apart from other findom mistresses...In the second part I show you my nasty findom and you can fullyenjoy your pay slave existence. I seduce you with my voice, my body and my suggestions... Give you the relief that your pay cock craves. It's time to kneel before your cash goddess and submit to her financial domination!

Neph builded his career with a lot of struggle, starting from a poor family, but trying so hard for 10 years to have a Master's degree and work for the best financial companies. This year he was hoping to be the general director of his current company, but the economic crisis came and everything is different. The big boss likes him, but he had to fire some personel so his company can keep running. But firing people is the job of his bratty beautiful step-daughter, she is just 19, supersmart and supersnob and sadistic with the employees. One day she called Neph at her office, telling him that he is fired. He begged her to give him another chance, as he really needs this job. Melody thought about it and she kept him to the company, but his duties changed a little: he has to do the same job with the half money and, at the same time, he is the personal office slave of Melody!After humiliating him for her fun, Melody is bored with her office slave. She uses him as a furniture, resting her tiny sexy feet on his face and ignores him, massaging sensualy her soles all over his face. The bratty boss commands her footbitch to worship her feet, lick her soles and suck her toes, while she keeps ignoring him, relaxing back and enjoying to be a boss and a Dominatrix!

Mistress Alexis teases you with her sexy fat ass. She grabs her ass and oils it up showing you her perfect booty. Her slave appears before her and begins to sniff and worship her sweaty ass. Enjoy this delightful Ass tease & worshiping clip.

Cock and ball trampling. Girl in black high boots and fishnets plays with cock and balls. She uses also a piece of foil to make this play more attractive. It seems to be very exciting, because in the end he finishes under these black sexy boots... Time: 17.11 min. REMASTERED - movie from 2004

Mistress Mademoiselle Cloe: I have had the experience that men stand on my feet. I have also been offered money for my much-worn sandals. I think the guy secretly wanted to lick my shoes clean. Here you have the unique chance to lick my favorite shoes clean. First you stick your tongue between your toes and shoes and get your first taste. Then you will lick my extremely dusty shoe soles clean. I'll check that later. If you've worked well, you can lick the insoles of my shoes clean. The insoles taste like my feet. Do you like the salty taste?

Mistress Anfisa makes clear to the slave how he is to behave in her presence. She takes the slave on a leash and teaches him some manners! There is an appropriate way to educate each slave and for this slave it's being beaten for the first time with a whip. She strikes again and again in irregular intervals on his naked back. The slave cannot see the next blow coming - and moans even more with each hard hit! The crop leaves clear red welts on his back. Hopefully the slave has finally learned something from this lesson, because otherwise his next encounter with the mistress will be even worse for him!

Mistress Anfisa makes clear to the slave how he is to behave in her presence. She takes the slave on a leash and teaches him some manners! There is an appropriate way to educate each slave and for this slave it's being beaten for the first time with a whip. She strikes again and again in irregular intervals on his naked back. The slave cannot see the next blow coming - and moans even more with each hard hit! The crop leaves clear red welts on his back. Hopefully the slave has finally learned something from this lesson, because otherwise his next encounter with the mistress will be even worse for him!

I have a new slave visiting me, and I have some plans to destroy his taboos today. I know he tells me he is straight, but really? I donÂt believe it! I start teasing him with my sexy ass, and tell him if he behave very well, I will let him lick my ass. He is off course eager to please me.But I have other plans, and ass licking is not one of them! So I unzip a guys pants while the slaves eyes are closed, and pull out his dick. Then I tell the slave to open his eyes, when the dick is in his mouth. It looks like heÂs got the hang of giving a blowjob, so straight? I think not.

After delicious lunch, eating shit. She need wash her face, clean up a little bit of shit.My toilet slut Maya, brought herself basin full of soapy water. And as a real toilet bowl is washed with toilet gels and foam, so she began wash and rinse her toilet mouth. Soap bubbles and foam oozed from her mouth, and she rinsed her mouth with pleasure, but... she still, I decided brush her teeth with shit, so that taste of shit is not completely washed away. Satisfied and happy, she washes her swollen tits

First half of the clip starts with Mistress Alexis resting her shoes on her slaves face. she later takes them off and puts her shoe over his face and makes him sniff the insides of her shoe while her other shoe is stepping on his dick. The video then transitions into spitting, where Mistress Alexis is hocking nasty loogies in her slaves mouth. She spits in his mouth for 5 minutes before ending it with some sadistic facesitting & ball busting.