High heels trample on the board cockThe mistress wore a high-heeled shoe that trampled on the slave's cock, rubbed it with the soles of his shoes, and rubbed the slave's cock with a pair of pantyhose, thus stimulating the use of the crush cock.

Feel the pain! it will get worse! Every time u pay, it will hurt u!A delicous pain!AGAIN and AGAIN! Pay ME, Spoil ME! Its the only way u will ever get my attention loser! Lock at me, u cant resist u will always pay! Just like the bitch u are!

That sexy giantess is performing a hot striptease, when a tiny little man spying on her is messing around, stuck between her toes, she walks around with him between her toes and finally happen to stamp him flat! Your fault you little perv, I told you to be careful! 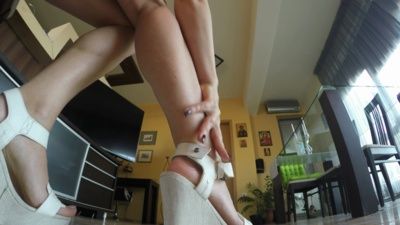 Hot Sarah does a strip, then in the bathroom with a great close up of her ass still being able to see her face she does a shit on the floor, she then shows it afterwards.

Lady Amy's in the mood for a trip. Her slave pony is ready to go. She jumps onto his back - RUN, PONY! The slave has to work himself to the bone to carry his mistress around. Lady Amy enjoys the view on his back and doesn't care about him. Piggyback he carries her round and round. He does what she wants because he is her slave and today he is her pony because she wants it that way! Next the slave squats down and Lady Amy climbs onto his shoulders. She really is a merciless rider! He is underneath her her where he belongs.

No matter how hard you try, you cannot turn your gaze away from my ass! You can't get away from me because you're addicted to my perfect ass! You love my hot ass. And how do you find it in these hot nylon tights?! Damn hot, right?! It twists your mind and makes you even more addicted! You are my little addicted slave and you just can't get enough of my ass. I make you so addicted that you can't think clearly anymore! Come closer and look at it. It's no wonder that you have become addicted to this awesome ass... Admire it and adore it! The sight makes you so unbelievably horny! Prove to me that you are and always will be my addicted ass admirer. You can't get away from this addiction! I promise!

The head of this slave looks like a tomato. It's bright red! He can't breathe under Princess Serena's ass. She won't let him. She just makes fun of him! He's a loser and doesn't deserve to breathe Princess Serena presses her sexy ass firmly over his mouth and nose so he can get absolutely no air at all. She wanted to give him a deep red face and she succeeded! How long can he hold out under her ass?!

You just can't get enough of me, can you, loser? No matter how much I hurt you - you keep coming back to me - addicted to being dominated! Today I'll trample your face under the soles of my Chuck 70 Converse sneakers - and leave some nice prints on your loser face. The rubber sole has so much grip on your skin - I bet it hurts like hell when I grind my foot on your face! But you know what's going to hurt even more? When I stomp on your face! And since you deserve to be humiliated - I'll take you shopping with me afterwards - so everyone can see the converse pattern on your face while you carry my shopping bags!

These two ladies know how to turn you on! They're both wearing sexy nylon pantyhose. You would love to touch Queen Hanna's sexy ass, but as a slave that's just not allowed! You're only allowed to watch the two girlfriends carress and stroke eachother's nylon-clad asses, but still, they look so hot and you can't get enough! Enjoy what Queen Hanna and Mistress Jane are showing you. Imagine what it would be like to touch the ladies' sexy asses. Wow, what a dream!

You belong in chastity. When was the last time that you really used your cock the way it's meant to be used? Think about it. When was the last time you had sex? Has it been a while? When you last had sex, did you even please your partner with your boner? Do you find that you spend far too much time masturbating to completion, only to be left feeling empty and sad? Think long and hard about the answers and when you arrive at your conclusion, you'll realize that the only thing in your life that will be long and hard are your thoughts. Your cock belongs in a cage.

103633 - Kinky lesbo piss action! My girlfriend, Dirty-Priscilla, pisses me in the mouth!

My smart mouth got me into big trouble yet again. to the floor where I'm left cuffed and gagged, all I can do is struggle unsuccessfully to get free. To add further insult, the ring gag makes me drool constantly.

7004 - Hard Whipping - Punishment of the Slave by Mistress Redhead GirlsFetishBrazil

The punishment of the slave: There were many lashes, without any rest, the slave suffered every second, he had a gag, but could hear him dying of painRedhead: She is very cruel, she has a very heavy hand, whipped the slave with all her strength, she gave whips and still laughter from the slave's suffering, pure sadism

My smart mouth got me into big trouble yet again. to the floor where I'm left cuffed and gagged, all I can do is struggle unsuccessfully to get free. To add further insult, the ring gag makes me drool constantly.

The human pet has been starving for days - and today was his day to be given a drink and his food. The owners look at the diapered stable animal and smiles at how it meows and begs them for food. He will get was he deserves at every turn, and today was his reward day. The owner squats on top of clear bowl unleashes a strong torrent of golden piss. It gushes down her pussy and onto the bowl, splashing powerfully in a circular haze. She had been holding on to that pee for hours, it felt so good! She farted into the bowl and pushed hard, unfurling a sticky ribbon of turd that plopped lazily into the bowl. Measuring a few inches, it was the stickiest shit sheÂs had in a while, and she loved the feeling it gave her. The human pet reached greedily for the bowl when they allow him, slurping and sucking in the wonderful broth of piss and turd. The turd immediately went down, as the slave tipped the bowl and finished of the crushed shit underneath. No longer famished, the slave takes a bow and thanks the mistress endlessly for the reward of the day.

Akira brought in the desperate banker into her home, because he had begged her to become her full time pet and slave. She laughed at his face and spat on him, as the first sign of her dominance. In the bedroom, the older slave was bent and bowed to the floor, afraid of being hit and punished. Taking the opportunity, Akira places her entire weight on his back and begins riding him like a yak. The slave begins walking on all fours, making animal-like sounds. The humiliation was supreme, and he now felt helpless with his new mistress. The mistress decides to push the new slave to the bed, and remind him how useless he is Â he is nothing but a human RAG now. Pushing him to his back, Akira squats and proceeds to mash her SALTY pussy all over the slaves face. The untrimmed and unwashed pussy smelled sour and tasted salty-bitter, as the pussy lips grazed the bankerÂs mouth, tongue, and nose. Bearing down on the banker, Akira makes sure that the slave isnÂt able to breathe properly, and he is not allowed to complain. He opens his mouth to receive more punishment as the mistressÂ fat and hairy pussy descends once again to choke his entire face.

Akio tries his best to keep his mouth and throat wide open as the first glorious shower came. The piss was thick and salty. Next came the thick turd that almost didnÂt have a proper tip. It squelched noisily as it slid out, and engulfed AkioÂs mouth.

King Henry has two lovers, their relationship has always been very good; the common clothing 3 slave masters, cleaned their shoes and dirty feet, King bound slaves can not touch, smell the feet of the goddess ordered slaves to accept taste; two women face and spitting; accept love women who trample on the slave cock. crush