Hey Loser, you want my attention? You know there's only one reason for me to give you attention - your money - and lots of it! So, give it to me ... give me EVERYTHING! 500 Euros? That's a good start ... but it won't be enough ... it will never be enough ... and you'll give me everything - everything you own and everything you earn! Ah, another 500 Euros - now that's looking better! Look at the money in my hands - it looks so much better on me, don't you think? You love to be hard working pay slave - so that I don't have to work! That's your mission in life - the only reason you're allowed to live - and the only reason you get attention from me!

My sissybitch not only blows cocks, he is also on addicted to my heavenly and especially intense foot smell. After a long day with nylons in boots, my sissybitch is allowed to compete. As if hypnotized, he sniffs my foot odor and enjoys every sniff. After the sniffing session he is allowed to wash my feet extensively.

Actually, it is way too warm to wear these boots. See here? They are padded with thick fur and that makes my feet especially sweaty and stinky. Is my foot stink already coming towards you? Come on! Put your nose into my boot and breathe in very deeply. Pull my sexy foot sweat deep into your nose - it makes you indescribably horny! My boots and my socks are all wet with sweat, so suck my dirty socks of all that sexy foot sweat and take my smell completely within you! When you're done with that, lick my bare feet clean and inhale the sweat smell directly from between my toes! YOU lick my feet clean, because I want them to be completely free of sweat and fuzz! NOW!

First I fuck your brain, cut up your clothes and and take your money. I'm counting banknote by banknote of your hard-earned coal that now belongs to me. What brought you into this predicament? What did you want on the construction site that should be my loft? Did you want to spy? Do not I show enough of my luxury life? I'll take you all slave, and you'll thank me well ...

Mariella and Madison meet once again on the mats to finish their quarrel, Mariella hoping to finish off this new diva to gain top spot. Madison was dressed in a tiny blue g-string with her perfect ass showing. Mariella was determined to not lose this last round against Madison. Once they begin, Madison takes Mariella to the mats, and by the look on Mariella's face she was not happy. Madison is the queen of trash talk, especially in her condescending voice and manner. She pins Mariella down, squeezes her head as Mariella begs for her to stop. Madison then decides to scissor her instead, causing Mariella to choke. After a few minutes of being scissored in various ways, Madison says to Mariella "do you like presents?" As she said that she mounts Mariella's face in reverse and begins a barrage of farts. Mariella laid in shock as Madison coerces Mariella to smell and taste her farts, all the while belittling and totally humiliating Mariella. Now trapped in her ass cheeks, with no where to go, Madison takes control and continuously farts all over Mariella's face, in her nose and in her mouth, and rubs in it her face. Mariella was actually in tears, begging for release, right up until Madison lets her last fart go, finally thinking that Mariella had enough. Now she lay on the mats, face jammed in Madison's ass, red in the face, coughing and wishing this match now never took place.

For months my slave has been begging me to allow him to serve as my toilet... Fine, if that's what he wants! This is my 5th full-toilet training session with my slave. Last time when I fed him my shit on a salad he managed to eat it all so IÂve decided to serve him another delicious meal to give him some more practice. A plate of bakmi goreng topped with my delicious poo, yumm! I sit next to my little toilet and enjoy a cigarette so I donÂt have to smell his meal. My poo is firm so this time it should be a bit easier for him. And indeed, he manages to finish his meal in less than 10 minutes. Only once did he gag and almost puke but he regained his composure and finished it all. Good boy! The training WILL continue until heÂs able to eat it pure.

I've put the slave's face in the smother box and bound his hands to it as well - now his face is completely at my mercy! I step on the box and order him to suck my toes and lick my foot soles - then start to step on his face as well. He screams in pain as my full weight comes crushing down on his face, but it's way too much fun for me to see his face getting distorted under my foot soles and to hear his mumbled screams of pain! This is a non-exclusive custom clip for a fan. If you want me to do a custom clip for you, send me an email to marissa@madamemarissa.com!

Today I will make my slave into the most beautiful pony. I put my worn nylon pantyhose over his head. It has a colour like cheese and smells like it to! The slave takes my intense foot smell directly into nose, inhaling the cheesy odor. I love to do whatever I want with my slave. Today I humiliate him in the worst way and give him cheese-sock hands before I ride him. Unfortunately he is a very lame pony and bores me quickly. That's why he gets beaten on the bare soles of his feet with a cane. My cheese pony has to run faster!

Puppy girl Faye is looking for trouble... and a comfortable place to sleep. She knows her owner puts all of those comfy clothes things in these drawers and she is going to raid them. One by one she pulls items of clothing out of the drawer and throws them all over the floor. Woof woof... this is fun! And when she is tired of making a mess she snuggles down on the heap of clothes for a puppy girl snooze. She is sure her owner won't mind one little bit... 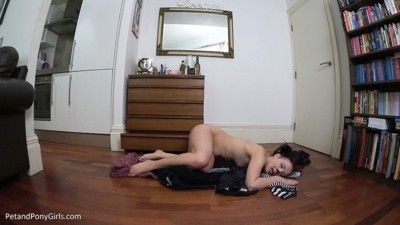 I know you cant resis that delicous view of me in my outfit. So you have to perv over me again. Argh gross. Well i may let you look but dont make me reconize you. I dont even want to hear you breath loser. Just watching and shut it.

Get down on the ground LOSER, where you belong, my boots need licking clean! You will eat all mud and also all ground around them!On the desert I'll spit on my boots and you with suck all till last drop pathetic slave! You become my personal bootlicker wherever I drive!

In this Indian Ass Smothering clip, Most beautiful and merciless Indian Mistress Meow continues to dominate a new comer. Mistress Meow is looking awesome in black one piece and long boots. She explains him well that he needs to impress her and do whatever she says. Mistress Meow explains she is a star maker and have helped lots of newcomers to enter the industry. She makes him lay down on sofa and starts smothering him with her full weight. Poor new comer has no choice but to follow her instructions. He is in need of money badly so keeps doing whatever Mistress Meow orders. Mistress Meow tries all the possible positions she can to sit on his face with her full face.She keeps on grinding and bouncing through out the clip. Must have clip for all facesitting and ass smothering lovers. Especially a gem for fans and followers of Mistress Meow.

Actually, it is way too warm to wear these boots. See here? They are padded with thick fur and that makes my feet especially sweaty and stinky. Is my foot stink already coming towards you? Come on! Put your nose into my boot and breathe in very deeply. Pull my sexy foot sweat deep into your nose - it makes you indescribably horny! My boots and my socks are all wet with sweat, so suck my dirty socks of all that sexy foot sweat and take my smell completely within you! When you're done with that, lick my bare feet clean and inhale the sweat smell directly from between my toes! YOU lick my feet clean, because I want them to be completely free of sweat and fuzz! NOW!

TODAY MISTRESS CARTER RECEIVES HER NEW NOVICE PETER. THE NOVICE WHO CONTACTED ON GROUNDS OF THE COOL PICTURES OF MISTRESS CARTER REALLY BELIEVED THE LADY WOULD MISS TO HIM A HAND JOB! BUT HE WILL REGRET THIS MISTAKE STILL PAINFULLY. BLOWS ON HIS STIFF TAIL, IS STILL THE MOST HARMLESS WHAT PETER CAN EXPECT. SLAVE SPITTY THE MISTRESS ONCE AGAIN ANGRY HAS, IT IS INTEGRATED INTO THE SESSION WITHOUT FURTHER ADO! TO MAKE ITSELF USEFUL, ACTED SPITTY AS A CAMERAMAN, WHILE MISTRESS CARTER HER NEW VICTIM PETER WITH THE CANE AND HIM WHIPS MANNERS TEACHES. TO INDICATE PETER SEINE VERFEHLUNGEN NOCH GENAUER, HIS MAIDEN ROSETTE WITH A THICK ELASTIC PISTON IS DRILLED OUT! FINALLY, FROM PETER'S SUFFER FROM FINISHING, THE NOVICE MAY DISTRIBUTE ON THE INSTRUCTIONS OF THE MISTRESS, HIS POLISHES IN MOUTH SPITTY'S!