He has to remove her boots and to sniff Miss Elsis sweaty black socks. He has to rub his face on the soles and to lick the sweaty off her smelly socks ...

The last part where Lady Luisa and Lady Domi use the slave as a human spittoon, kicking him, whipping him and humiliate him.https://www.yezzclips.com/store750

When I visited again with my girlfriend, Lady Luciana, she had prepared for me several slaves, as living toilets.These had to serve me, whenever I had to the toilet, as living toilets. Here you can see how I piss 2 of the slaves, in different outfits and under the guidance of Luciana, extremely in their slaves faces and mouths. Since both slaves could not swallow everything at once and some of my piss landed on the floor, both had to slurp up this piss. We made fun of the slaves and dominated them until they had swallowed everything!

You keep asking and I keep giving. For those who enjoy watching a video of only the best shitting scenes from a girl without any boring dialog & story line I bring you the seventh installment of ÂMy Best ShitsÂ Seated in comfort while taking a huge creamy Goddess dump right into my slaveÂs mouth, courtesy of Broken Toilet 28. My massive dinner from the previous night becomes my slaveÂs breakfast directly from my Goddess Asshole into his inferior mouth - Broken Toilet 29A gigantic shit that I held in for several days. I take this gigantic shit into his mouth and afterwards, while he suffers with my HUGE bowel movement in his mouth and all over his pathetic face I masturbate. Sitting with one of my feet on his chest that he must massage during his ordeal. Â From Broken Toilet 30Nothing beats taking a massive & superior shit while laying on your stomach in bed. He ate my entire bowel movement in this one (Complete eating scene only available in the Broken Toilet 31 video.)Be sure to check my store for all my other clips xoxo

Today I have a very special penalty for my slave. This pittiful little Loser gets bound and tickled very hard. He doubles up with laughter, this armly Loser, because he is awfully ticklish at his feet and his belly. I don't give him a break to take breath and tickle him until he begs for mercy. But even then he wont get mercy. I still carry on..haha!

Sexy Black Mistress dressed in a sexy nurse outfit, has a male slave restrained in a cage, and starts beating and slapping his big hard cock, then she abuses the slaves nipples as the slave cries out in pain, In another clip the sexy Black Nurse abuses and degrades her sissy tranny toilet slut, face slapping, spitting in the whores mouth, then taking a long piss into a chamber pot, and orders the filthy toilet slut to drink it all up out of the chamber pot filled with her piss, while oinking and slurping up the piss like a pig !! The kinky Black Mistress gives the sissy fag another beating on it's fat arse, as the slut is humiliated some more, it's mini dress soaked in the Mistresses hot piss.

My little slavepig has extra misfortune today. His hands and feets are bound at a chair, he has a gag in his mouth and his eyes are bounded. So he will not see how I do an extremly hot strip on him. First I doff my dress, take off my bra until I stay naked in front my blind loser who needs to feel how I loll on him and be more naked every time as before.

A short blooper of funnies as Melissa and I attempt a 'serious' face sitting clip. Awkward positions, laughs, trying to say lines without laughing, smother attempts gone wrong, just another day ON the job for Melissa and the poor boy she sits on ^_^ 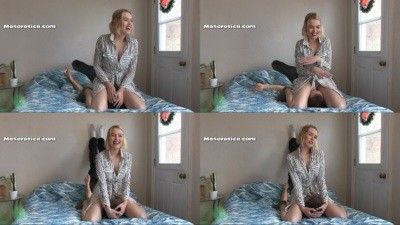 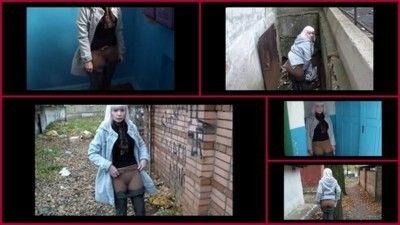 Mister Apnea, the most famous fetishist in Italy, has a new female assistant for his daily breathing exercises: Karima, her Muslim neighbor, a woman born in Italy, but then converted to Islam. Often times converts change their names to Arabic names - so Isabella has changed her name to Karima - but it was just one thing she could never change even if she wanted: the horrible stench of her feet! Mister Apnea knows well that KarimaÂs feet stink a lot, so he invites her to visit him for some funny fetish games. When she gets home, Mister Apnea is already lying on his back (on the cold floor). Karima sits and then stands on his stomach to reduce oxygen level in his body and puts her smelly socks and, then, her stinky bare feet directly on his face in order he can sniff only the cheesy portion of air contaminated by her unbearable stench. In the middle of this odd training Mister Apnea changes his positions: he lies face down, while Karima climbs on his back, putting her cheesy feet close to his nose again. These are hard times for the olfactory organ of our freediver-fetishist who, despite suffering... seems to like!

My Sneaker are pretty much coming to an end. I was wearing them for a long time and very often. You can see that, especially on the inside. You love old broke stinky sneaker and socks. Socks that used to be white but now they are so dirty that you can barely see any white no more. Socks that take your breath when they are on your nose, all you smell is a extreme smell of feet, my feet!! You love them, they are so cute and innocent , my little toes so ready to get sucked. My soles dont know any mercy and you cant wait to get your delicious meal, the dirt between my toes.

Wow look at me Loser. I am wearing one of my Fuck me Outfits today. But of course obviously not for you. Not for a pathetic virgin boy. You can only dream of sliding that cock into a slippery, wet and warm Pussy. You dont even know how to put that thing between your legs to good use.So dont even try it. Guess even if a girl would want to fuck you it would not work. As you are not turned on anymore by pussy. You are turned on by my pussy and the denial of it. My mean and bratty words turn you on. Humiliation turns you on and thats something i am very good at.Guess you will stay forever a virgin that beats his dick to my loser porn. Just what you have been born to.

You know when people say, "oh he lets her walk all over him"? Well, this is literally what I do! I trample all over my slave, walking up and down his back in my bare feet, squashing him into the ground! I verbally berate him and humiliate him,teaching him a lesson for his bad behaviour. I also sit my full weight on him, showing him that he exists solely for my own purposes an amusement. I also give him a bit of an idle seeing to with the flogger - I find flogging my slaves while I'm thinking really helps with inspiration...

I'm having a coffee break with my beautiful mistress friend, and there's a slave that we have to punish. We have him on the floor, and he's jammed between the entrance walls. We are both wearing sharp stiletto heels, and our bitch is going to experience the luxury of some trampling. As I step onto his flabby belly, my slut lets out a squeal. Then I put my full weight on him as I begin trampling and digging into him with my sharp stiletto heels. My friend decides to join me, as she stands on him and then jumps with her heels bringing cries of painful desperation from our slut. We are having great fun, and we decide to remove our shoes. I stand on his head and face, while my friend jumps on his flab making him squeal like a little piggy. We continue to make him suffer as we pulverize and trample his body and head. It's been great exercise and fun, and we finally leave our helpless slave bruised and breathless...

My new slave licks my good after a walk in the woods my Overknees clean. The sole was also allowed to be cleaned with the slave tongue.Look at it well and become my shoe licker too!

Today I will drain you again loser! Your balls are full again or? However, you will be trained to a be very special pay piggy. You need a long nylon stocking and then we start! I will tell you how you will bound your eggs! I'll tell you how strong and how long! I can finally do with you what I want!

Mistress Zora sits in front of her slave while holding him on a leash. She takes off one of her high heels and spits on the sole. She holds the shoe in front of the slave's face, her spit running over the sole. LICK IT NOW! The slave licks the sole - not a drop of her sexy spit may remain. Spitting Mistress Zora spits on her sole again. Every inch has to be licked clean.