Megan is so spoiled little princess! She want everything and when she does not get something she's mean and bratty, she humiliates, she screams and swears until she gets what she wants.Today Jack, her boyfriend, went for a shopping with her and bought her several shoes and clothes and jewelry and ton of other stuff but not one pair of shoes Megan wanted for her party she's having this evening. And she's furious! She screams at Jack and forces to break up with him and that poor schmuck is so in love with her, he begs her not to break up with him, he goes on his knees and begs and humiliate him self and Megan is still more and more mean and bratty. She forces Jack to give her all the money he has on him right now but that's not enough and she wants more! She wants his credit card. Now! And in order no to drop him like a trash he will have to take care of her shoes, her high heels and her feet as well. Jack falls at her feet, begging and kissing her shoes in humility. But Megan wants him to lick the bottoms of her shoes, clean it and Jack does what she wants. Megan enjoys this role of a goddess, men are crawling at her feet, begging for her attention, paying her and she can dominate and humiliate them. She feels like a princess. Like a mean, spoiled and bratty princess.

Hi guys and dolls. This video is a special at work. I never did that, so it's a new concept! We chat a little, then we choose the toilet of the shooting. I show you the places then I drop my tights, my panties and the magic operates. A flow of caviar comes next. Without forgetting to show everything before rubbing. Kisses 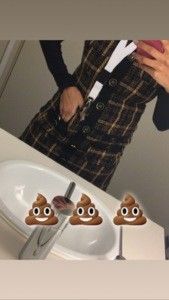 What a sexy jeans ass! Queen Hanna turns her perfect ass towards you and strokes it! Her blue jeans are really sexy and her ass is so awesome! Queen Hanna kneels on a chair so she can thrust her ass even more towards you. WOW! What a perfect ass!

Best Video Studio beautiful-girls! Pantyhose DominationSexy Morgana Girl the size of footwear is (EUR 40) (US9) Height 178Sexy Julie Girl the size of footwear is (EUR 41) (US9,5) Height 1800147___ The new model Morgana! Enjoy her each side. Sexy, beautiful athletic tall Mrs. Morgana along with serious Julie play with a slave. Julia invited her friend, who was also not oppressed to slaughter a slave and spit. Morgana holds the slave by the hair, not allowing him to lower his head, and Julia slaps his face with her legs. Both girls spit at the guy and cover him with saliva. Then, the girls change places and now Morgana beats him with her feet. The face of the slave is red from blows and wet from saliva.

0147___ The new model Morgana! Enjoy her each side. Sexy, beautiful athletic tall Mrs. Morgana along with serious Julie play with a slave. Julia invited her friend, who was also not oppressed to slaughter a slave and spit. Morgana holds the slave by the hair, not allowing him to lower his head, and Julia slaps his face with her legs. Both girls spit at the guy and cover him with saliva. Then, the girls change places and now Morgana beats him with her feet. The face of the slave is red from blows and wet from saliva.Sexy Morgana Girl the size of footwear is (EUR 40) (US9) Height 178Sexy Julie Girl the size of footwear is (EUR 41) (US9,5) Height 180

While one slave must lick my latex pussy one is ordered to suck the other slave's cock! One slave is made into a bi-slave and the other is taught to lick! What a pair of losers we have here before us! The important thing is that they obey our every word as we laugh at and humiliate them. The bi-slave also gets slapped and received a hard spanking on his ass. He hasn't sucked hard enough so must be punished!

ITALIAN SPOKEN - This human toilet being needs to continue his training. After filling his bowl with my divine piss and letting him lick a little ', I will shit inside, creating a special cocktail of urine and shit. He will have to continue to drink and lick, while I, sitting comfortably, ignore him chatting and talking on a cell phone.

Wearing her old Combat boots in the heat of SUMMER during a HEATWAVE, Celine challenges you to smell and worship her hot sweaty stinky feet! She walked around in these heavy combat boots all day BAREFOOT! Can you just imagine the smell? Plus to add to your humiliation, she will be filming you to post up on FootBrats.com for the entire world to see! Your friends, your family, everyone you know will see you smelling and kissing her feet freshly pulled from her sweaty dark humid combat boots! It will be your GRAVE, she will BURY your face beneath her FEET as you gasp and beg for fresh air!FUN FACT: THIS VIDEO ORIGINALLY WAS NOT 'POV' WITH ME IN IT, BUT I FAILED HER CHALLENGE AFTER 20 SECONDS LOL. HOPEFULLY YOU CAN LAST LONGER? HER FEET SMELLED SO STRONG I FELL TO THE FLOOR! GOOD LUCK! 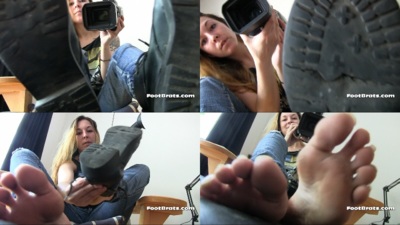 Wow, this castle is SO hot! I'm all perspired and stinky, and the ball will start soon! A queen cannot go to a ball like this so this is where you'll help, slave. Come closer and start licking my sweat off. Take deep whiffs and let my aroma permeate your weak brain. I bet you want to stroke your dick for the Queen after such an "ordeal"...

Queen Hanna's slave is ordered to lick her hot high heels clean. Her friend, Mistress Jane, closely watches how thoroughly he does it. With firm whipping on his butt, she increases the pressure. LICK CLEAN!!! Anything less will not be tolerated! If he doesn't lick well enough, he just gets more strokes!

Once there was a popular movie - 50 Shades of grey. So we have decided to make our own version without all that not necessary nonsense. Only sex, only shit, only hardcore.It is 50 shades of drown, 50 shades of Shit, 50 shades of filthy and everything you could hardly imagine what can happen between loving couple..Epic, lovely movie with tons of shit from asses, from bags, from everywhere. We love our work, our life, our filming and way we live in almost daily scat sessions. Hope you enjoy our show too.Shit Kisses. Aria.

This year, we go with a special clip. And nope, the pumpkin isnÂt the only highlight in this clip. You may admire my hot ass in a great gothic outfit. IÂm combining it with a sexy pair of overknee leather boots and some leather gloves. Have fun watching and happy Halloween!

Today, I with two of my mistress friends and we a are going to have ourselves a blast. We have wimpy slave with a small cock, our intention is to stimulate his tiny cock. Of course, it's going to be painful therapy for our slave as we will not be holding back. He's led into the room with his balls tightly tied with a leathe leash. This should assist in making his cock a little larger. However, I'm not so sure he's going to be able to generate a new found throbber. We get started by spreading his legs, and we take turns at giving his balls a good kick. Our bitch is having great difficulty remaining upright. So we put him in a armlock from behind to allow us full exposure. Once again, we continue to give his balls a painful kicking. As our bitch falls to the floor, we make him show gratitude for his therapy by kissing our beautiful shoes. It's great fun, and I'm sure our bitch of a slave will require more tiny cock therapy...

Today IÂll be talking about an extremely important aspect, so pay attention! It might appear simple, but especially in the beginning it proves to be rather complicated for most of you morons.

Bind my slave to the bed. Now he gets some domina kisses from me. With genus, my slave takes the spooky generously. I am now working on his nipples. It continues with facesitting and sit on his face. With skillful movements, I circled my pelvis and rocked back and forth. He had to gasp. How I love and treat him nicely. 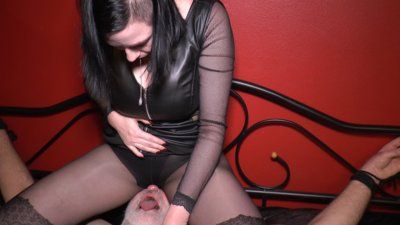 Well, how does the slave like Queen Hanna's shoe? Of course the slave likes the shoe!!! Mistress Jane spits on the sole and holds it in front of the slave. LICK IT! The disgust can be seen on the slave's face, but he does what his Mistresses Jane and Hanna demand of him. And this is only the beginning...