ITALIAN SPEAKINGToday I'm with my mistress friend @DungeonRoma and we are taking a little break. However we have a slave in chains, and he's been waiting for us to arrive. We haven't yet decided what to do with him. So we thought it would be a good idea to relax with a cigarette while we make up our minds. We light up and our slut wonder what's going to happen to him. Of course he can't escape and is completely at our mercy. We begin to blow our smoke into his face, and flick our ash into his mouth making sure he swallows all of it. We couldn't resist teasing our bitch, and decide to give him some nipple torture by burning them with our ciggies. He lets out a squeal and I tell him to shut up or he'll really suffer. I give him some incentive by burning that pathetic little sausage he calls a cock. As we finish our cigarettes we stub them out in our sluts mouth and get him to swallow the butts. We then allow him to clean all the ash from the floor using his tongue. We enjoyed our cigarettes and have now decided how we are going to make our bitch suffer. For now, it's been a great little warm up...

Kylee sits on 'toilet boy's' face telling a story about a bunny before she 'bunny hops' on his face, wedging his nose deep into her crotch! She looks stunning in her knee high boots and crimson red yoga pants! If you want to breathe I hope you brought a carrot! she taunts. She stretches across his face kicking her boots up, then kicks his head a little with her heel to see if he's still conscious! She taps and knocks on his head like a drum making sure her ass completely covers his face so he's not sneaking in any breaths!She sits on his face reverse burying his face and nose between her soft butt cheeks. Kylee wants to see his face turn to the same color of her pants, red! It's a good angle, I like it she says admiring herself in the camera as he helplessly smothers beneath her. She does a few 'butt drops' and throws in a few 'butt wiggles' for good measure, making sure his mouth and nose get right in there!Kylee stops the shoot so she could go out that very night with some friends and returns to complete the video. She wanted her yoga pants sweaty from dancing out all night, stinking of alcohol and sweat. But right before the shoot resumes, the unthinkable happens! Kylee takes a 'Number 2'! Once she's done her business the camera flips back on and Kylee can be heard flushing the toilet and giggling before resuming sitting on his face! The smell must have been overpowering but it's not like he had a choice! She hasn't showered in a while, partied all night, and now just went to the washroom before using his face! How come everytime I sit down your face in there, like they were mean't to be. Kylee says jokingly, with a hint of truth! Kylee slaps her own ass,I don't know how your head can withstand all that pressure. as if nearly feeling sorry for him, but then goes on giving middle fingers to the camera, as if for HIM to see how much she really doesn't care once he edits the footage! Kylee goes on taunting him non stop as she continues crushing his face flat beneath her bottom without mercy! Wake up! Oh yeah you can't because I'm suff0cat1ng you! hahaha...Your nose is crooked! hahahahaI wonder what's going on FACEBOOK!...Take a picture of myself Kylee says wiggling her butt on his suff0cat1ng face as she takes a SELFIE to post on facebook! She gets interrupted with a phone call, but nothing is enough to get her butt off his face. She lies her body across his keeping his mouth and nose buried between her butt cheeks and bounces to play/taunt with his air supply! At the very end she gives off one last middle finger to the camera (probably mean't for 'toilet boy' to see when he edits the video since he can't see it happening in the moment). Ending with a hot angle of a nice close-up shot of her butt with the outline of her black thong peering through her red yoga pants. When she finally lifts off his face, his face is a deep red just like she wanted, matching her yoga pants!(clip time 11:42)

Private Spitting Fun!The young Colombian Mlada mistress uses her slave as a burp Christopherl face. In various positions she spits in his face and uses his mouth as a spittoon.

Christin crushes Cars with her Hunter gum Boots. She walk simply over it , stomp they in the mudy ground. At the end she crushes an apple on the remains of the cars.

This slave is used to harsh pain already but his evil Mistress keeps on inventing new ways to make him suffer more. Tight pegs all over his dick and in his nipples are no longer hurting him bad enough? Well, then she will burn him with candles and drip hot wax on him, pierce the most sensitive parts of his body with Wartenberg wheel and even scarify him! See that word SLAVE on his back!

NEW !!! Mistress Ezada second scat movie !!! Mistress Ezada has lots of slaves in Her stable, so this ugly pathetic loser that said he would do anything to serve her can have only one use: to be Her full human toilet. This is a huge honor for him, and he should be grateful to receive and ingest anything that comes out of Her divine body. For that, THIS SECOND TIME, Mistress Ezada use his mouth with her friend, for a better feeding !!!! But just in case he isnÂt very eager to swallow everything, she get gloves for a better feeding. Anyway, the toilet know his place and his fate : to become only a mouth for chewing her shit ! He finish ÂprocessingÂher waste and her friend waste as usually, drinkin her divine piss also ! This video have a HUGE price because of his unicity ! 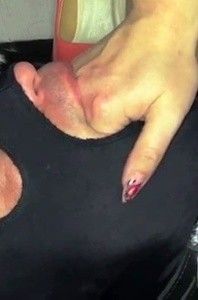 Alicia is just home from work and is ready to get out of her outfit and relax. Already on her bed, she starts by taking off her heels, then asks, "Do you want to see me take it all off?" I think Alicia must've known your answer to that question!

Sniffing Inhale and being driven into the dependency of your goddess with Blackmail games is the only thing that really kicks you. This time, there is no escape, you think in every single clip that you draw from your perfect goddess Jacky in your fucked brain "How much, I would be a little Inhaleschnffffelnde Blackmailfotze my Lady Lady Jacky". In this clip, you will finally put off your fear, your head cinema, you will drop in my hands and orders and finally transform your dream into reality with me as a "Mistress" by your side.In this dangerous clip, you will pull my instructions on your bottles and you must also log in to my chat to finally, without hesitation, the requested data I will ask you, of course, honestly answered to me to send.You are dominated, trained and totally fucked willless.Convince yourself smaller, and offer me what I really deserve! Your life in my possession!Buy my Brainfuck clip and let me play my blackmail game!

A sunny day, and I walk barefoot through the forest. I discover a bank and take a break.My feet are black from the forest floor and as I look around, I discover a man. It did not lastlong and he was in my spell. Without much hesitation, he gets on his knees and starts to lick my feet. He licks faster and greedier and it seems to get very hot in his shiny jacket. He probably seems seemsto have a very special fetish too. I let him lick my feet while I enjoy the sun.

New month, new loser quality time for you and your tiny faggot dickÂ provided that you pay your taxes! Stroke your wiener by watching my feet wearing mind fucking dirty white sneaker socks. This time I also will fill your ugly mouth with them Â so I donÂt need to hear you moan! Buy and stroke!

Watch carefully me while smoking a cigarette. First of all I keep it in my mouth, then I put the cigarette in the part that you want more and that you'll never have. Yes, I put it right there! After collecting my vagina fluids, I get smoke in your face waiting for you to come. Move your cock please... I have to go, silly slave!

The two Hungarians, mistress Bianca and their friend Lena use the face of slave Richie as a spittoon; They spit it for it under permanent insults and verbal humiliations again brave into the face.

10446 - Give your hot chocolate Mistresses your cream

Today I'll sit on your face in these really tight jeans until the hard seams left a deep imprint on your face - so everyone can see immediately that you're nothing but a human seat pad! Look at the jeans - do you see the big seam right in the middle?! I'll imprint this one on your face - from your chin up to your nose! And when I'm done with you, you'll not hide in your car or flat! Instead you'll get some groceries for me - so all the people can see how I marked you! Maybe I should bounce on your face a little bit ... I bet a crooked nose matches the imprints in your skin perfectly!

ENGLISH SPEAKINGCUSTOM REQUEST - I would like a video with you and another mistress. Both of you relaxing with some cigarettes, and using a slave as your human ashtray. I would like to see as much as possible the cigarette ash being flicked in her mouth. Also, after them being stubbed out on her tongue, she is made made to chew and swallow all the cigarette ends...

Goddess Allie is pissed and had a bad day! she takes it out on her slave by throwing him to the ground and stomping him until hes crying! she jumps and you can see his bones bending under her weight!

You're such a pathetic fucking loser. You've been DESPERATE to commit to me, but you are a loser slut. You talk to all those other girls, I see them all on your twitter feed. You need to be OWNED, and this JOI video will finally make you MINE.