Joss is the lightest girl on the site with 52 kilos and Bea is youngest and heaviest with 73 kilos. It's known that small girls are poison and that is Joss. Sadistic nature and girl who knows to have fun. Bea is different. She is cold as ice and she is aware of her weight. She uses the weight to crush anything under her body. Slaves runaway from her. Guy d1es between the girls' legs and under the scissors.

Hey, piece of shit. Crawl to me and lie down on the floor. Lick my big ass and enters your tongue in my ass. Lick it clean and smother of my ass. Now I'm going to shit in your mouth. Open mouth wider and swallow my shit, stupid slave.

My beautiful feet serve it right to get spoiled ripe. This little deadbeat need to do his best today because he has disappointed me the last times. He must lick my feet how I want it. Every single toe, every interstice between the toes needs to get licked extensive clean. He must suck all my toes. Only then I am pleased with my footslave.

Goddess Anita make a new movie with her toilet today. She wanna give him a lesson about training him into toys, into receiving 2 toys in ass, sametime, and train him to become just a pet for her dirty needs. She use his asshole as she wish and she empty her bowels into his mouth letting him cumm while eating her shit. She also doing a bonus movie with her diarrhea at the end. 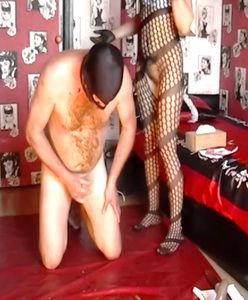 Let's see how this slave does as a human pony! I start riding on his back and use a belt around his neck to keep the balance - or use the same belt to whip him! In between he has to lick my sexy boots, I trample his hands and enjoy to make him suffer. Then he has to carry his riding mistress again!

How hard can I slap the slave with my feet? I'm having fun and the loser suffers as my feet hit his face! Of course he has to smell and lick my feet in between as well! And if he doesn't lick them good - he gets more slaps with the foot - until he finally understood how to properly lick feet!

11 July 2017Everybody needs air, in order to live. The same goes for slaves as well, but because I am a merciful Goddess the air I provide my servant is way better than the natural air. You would not believe that by his moanings and pleads, but the truth is that this is what he craves. Even though it repulses him, it arouses him just as much. Even if he begs me to not shit in his mouth, he obeys in order to make me, his Goddess happy. I really tease him throughout the entire clip, giving him just a tease for whan he is about to be made to consume. I don't even get affected by all my farts, because I've trained him to consume them really well, so that I can chill on my phone without the foul smell. Either by containing them in his mouth, or quickly ingesting them through his nose, I demand that every gas that comes from me is to be inhaled. But enough of me being so nice, duties are not to be forgotten. I require lubrication of my asshole, and a place to shit a.k.a. my slaves mouth. After I've pushed it down I suffocate him with all my weight, to make sure he recieves no air, other than the smell of my shit, ass, and farts. He lives breathing from my waste, he lives because of the air I've provided.

Just someone like you, who's a loser all along the line, would pay so much money for a glimpse of attention. You're paying huge sums for me to humiliate you blithering idiot and I like that! That's just what you've been made for, loser, as long as I demand it from you! Stop crying - I'll make you prominent! A photo of this picture of misery in front of my feet will soon reach all of my friends and I bet that you've never had so much attention, loser. Am I right?

80751 - Endoscope trip inside my ass and fertile pussy

A fantastic endoscope video! You can see 5 min endoscope asshole view toilet fetish... pee... and a very dirty exploration inside me (oh yes baby in this video you enjoy a trip inside my ass)... at the end a sexy close up of my fertile pussy with a lot of cervix mucus...

My slave beg me to see my beautiful tits, I've made him this pleasure and gave him very good (close) view. I squiz his head so hard that he couldn't breath only smell my perfect breasts. I had so much fun taking control and use my strength to put all my tits to his face and smother him.

Come here, look carefully at my feet, in a moment you will become my slave. Spinner is the toy of the moment, but not everyone is playing like me. Hurry up, I expect you!

A fan sent us some of his beloved CDs and cassettes, a pair of headphones and a toy car - and of course Madison and I are going to crush it all. Madison's wearing a pair of red sneakers and I'm wearing my white converse. We take our time and make sure to crush everything into bits and pieces.

Time for a comfy smoking break after Iâve fucked your asshole several times today. Of course Iâve got another task for you to calm down, because Iâve notived so much dirt and dust on my boots and I really canât accept that! So move your flannel and clean my boots devotedly with your tongue until they shine like theyâre new again! I demand your highest commitment and I donât wanna wait the whole day, so get stuck into your work and prove to me if youâre a good bootlicker, slave! I wanna see your devotion by cleaning my boots from all the dirt under my soles and on the lace.

I will make sure that all you can think about is me 24/7. So its fitting that you my dear stroke puppet jerk your dick at forbidden places. Like at your work. What a forbidden but also really hot phantasy. Well today the phantasy will be reallity for you. I want you to play this clip when you are at your work place. It will be risky, yes. But everyone knows already no risk no fun my little boy. So get ready for some naughty fun. I will make sure you dont forget this that soon. And remember Goddess is everywhere where she wants to be. And now get your dick into your hands.... haha

At my public resting place action at the resting place In Elwen for everyone on June 3rd, stuffed me, the next cock my mouth. The resting place visitor gave me an extreme Deepthroat. He held my head tight and fucked my slut mouth, hard. He pushed his cock, always, completely up to the eggs, into my mouth. So I was extremely puking as well as drooling with extreme gagging. Here dripped my drool and vomit on my tits and body. He fucked my mouth so long and hard, until he sprayed his sperm into my mouth. Play with his sperm in my mouth before I swallowed it, greedily! And all this in front of numerous spectators. The audience, you can see in the video! They were just waiting, to stuff my mouth,too! Yes people, that's real, extreme, public sex!

82606 - Facesitting humiliation at the bed

Anabelle enters the sleeping room and presses Faina towards the bed. She doesn't wait very long and puts her sexy thong ass above Faina's head - and finally sits down at her face! You can easily see how much fun she has! Then she has to change the position so the black haired brat girl Anabelle can continue with her facesitting humiliation. Again and again Anabelle presses ass hard against the face of her girlfriend. Don't miss this great facesitting clip!

You're eager to serve me as my foot slave, aren't you? Of course you are! Lie down and worship my feet now! I stick them into your face and you'll lick them! And lick them good - I want to feel your tongue firmly on my feet, foot slave!

You're interested in my kempt hands again, I can see. I know welll about your hand fetish and stick my hands out towards you. You shall be able to look at them really close. I even show you the palms of my hands and how I stroke my leg with my gentle fingers...

I am in the mood, and I need to shit! So I tell my slave to get behind my ass and take what comes out. After peeing the logs start to come out, but my toilet misses too much! It falls to the floor, and I am not too happy about this. He is also struggling with eating my shit! What a shame, this is the only thing I allow him to eat! So he should feel privileged by being served this delicious meal by his Goddess! But as a punishment I tell him to put the shit that he missed in his mouth. I tell him to go out on the porch, and stay there with his mouth open so everyone can see what a disgusting toilet he is! I just close the door and leave him there!