I'm going for lunch with a friend, and I ordered my bitch of a slave to make sure all my shoes were cleaned. While I was attending to some business on my phone, I noticed my slut was sniffing my shoes. What a cheek!! So I bound him in a hogtie on the floor, and placed him in a tight head harness gag. I pull up a chair, and sitting down I give him the opportunity to clean my shoes. Of course my slut has to use his tongue. I also have my flogger to hand to give my bitch some incentive. As I change from foot to foot, I can see he's having difficulty using his tongue and I don't have a lot of time to waste on my useless pervert of a slave. I'll attend to him when I get back, as I leave him in to wriggle and squirm in his gagged hogtie. Drool for me slut...

Look at this mess, you dirty slave pig! IÂd love to do that to your miserable little balls. You donÂt deserve anything else but getting treated like shit. Why are you standing around this stupid? Lick my heels clean or IÂll bust your fucking balls next. The next time youÂll have to forfeit your useless slave balls, you little loser. In the end IÂll spit all over your dirty fucking face. You wonÂt forget your domina too soon.

You fucking Loser are hot for my Ass? I see your the apetite in your eyes! Its a taboo for you wretched failure to touch it! You will worship and deify my hot and delicious butt! Go down on you knees and look up to it! That makes you crazy! You are damn hot for the big and hot ass of you mistress, that you are completely addicted to it!

In this Extreme Pony Play clip, most beautiful and cruel Mistress Meow got a slave who came for pony play session. She is dressed in beautiful black leather mistress costume. She is looking awesome and stunning. Mistress Meow starts riding a slave all around the room. Slave starts riding her. Initially he is so fast and active. But as time passes he starts tiring and felling down. She has a whip in her hand and makes good use of it scaring slave and making him stand up and rider her again and again. She keeps riding him through out the clip completely ignoring his begging for mercy. Finally she makes him kiss her both heels one by one while resting her other feet on his back. Must have clip, especially for fans and followers of Mistress Meow to see her in real action.

ONE DAY AT MY HOME 2You enjoyed the first day at my home? Then this clip is suitable for you.#Alpha #Beta #Cuckolding #BootDomination #HumanAshtray #ToiletHumiliation #DisgustingTasks #HumiliationL I M I T E D !

Look at how sexy Lady Liana flattens this teddy bear. Wearing her denim hotpants she lands heavily as she jumps up and down on it. That really finishes the bear and next time it's your turn! She makes you as flat as the teddy under her sexy ass. Take a good look and you see how Lady Liana will crush YOU.

Our slave pig is being used again today. He must kneel down before us so that we can use him as a living footrest for our divine feet and high heels. Finally we use him as a human ashtray. OPEN YOUR MOUTH AND SWALLOW!

Mistress Dark Phoenyx sitting on the toilet dropping some big hole stretching turds out of her beautiful ass. She loves feeding shit boys and can be followed and contacted on twitter @dark_Phoenyx.

ITALIAN SPEAKINGI know you are a lover of my superior latex games. It's one of my favourites too, I so enjoy seeing the frantic panic in those bulging eyes from my breathtaking hands. Today I have a slave on my table, I have him tightly wrapped in clingfilm, then completely and securely bound in red pvc tape. There's no escape and he will be completely at my mercy. I also wrapped tape around his head and face, leaving a tiny space at his mouth to allow him some air. I know my bitch is going to get very hot in his sensory deprivation, that's the way I like it. He's going to suffer and I will enjoy every minute of it. To begin I give him some hand over mouth smother, it's a great warm up to get me going. As my bitch gasps and tries to struggle, I tighten my grip around his mouth. After a short while, I decide to add my favourite accessory, and bring out my sexy latex gloves. They are so tight, and I love that sound as I stretch them over my fingers and pull them onto my hands. I'm going to enjoy smothering my bitch as I place my hands over his mouth. His gasping sounds get louder as he desperately sucks for air. I allow him a short reprieve, as I shove my fingers into his mouth making him choke. It's such a beautiful game, and I'm going to keep my bitch in bondage all day as I continue with his breathtaking latex suffering...

My mistress friends and I are going to lock away your useless little c0ck! You are far too distracted by the contents of your pants and so we have decided to put you on our Chastity Training Programme. 6 weeks of confinement! We talk you through the programme, explaining what you will be required to do - or not do - each week, and how you will find your freedom at the end of the 6 week period! As Lady Bellatrix says, "if you cage the cock, you control the man"...you will be fully under our control...

You really think I'd be interested in you?! Haha! Dream on! You little LOSERS don't interest me at all. Why would you?! You are scum and worth nothing at all! You belong down on the grounnd so you can look up to me and worship me. *That* is your place! I'm going to take your money, pull it straight out of your pocket and tear it with my nails. YOU don't matter to me. I wony want your MONEY! Now, pay me a tribute of 30 euros. Hand over the money and fuck off!

The toilet slave eats the mushrooms with shit while the scatqueens humiliate him, spit at him and laugh at him. In between, there is some pee, what the slave has to pull through his nose.https://www.yezzclips.com/store598

What a lame duck at fucking - I'll beat his balls into the blue - he doesn't need them anyway! While he's completely inappropriate as a lover, I will introduce him to his new grade of being. I kick his balls over and over again while I can't stop laughing at this loser! So to speak, I just wait for his cries and complains, just to kick his useless balls even harder..

Full Movie - To conserve water, this couple decides to take a shower together, but it doesnÂt end the way they expect it to be! In the middle of the bath, they get aroused, causing the sweetheart to suck dick and eat the manÂs asshole! After which, the guy returns the favor by orally pleasuring the sweetheartÂs pussy! In the middle of it, she couldnÂt stop herself from pursuing her rather dirty fetish; she pees into the guyÂs mouth! It doesnÂt end there, she eventually defecates into the hands of the man! When she could no longer release anymore, she grabs her feces and then smears it all over her face! In the process, she gets some into her mouth for her to devour! Though, she also left some for the man! She spreads it all over his body, from his chest down to his cock! Then, she defecates again, this time, she catches her poop in her hands and then serves it into her mouth! She then spit swaps it with the guy before swallowing all of it! 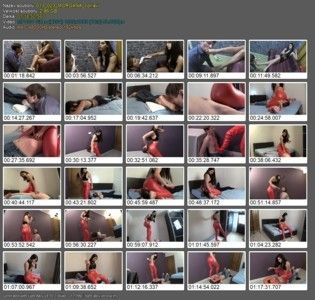 016___Morgana is very beautiful and calm girl, but no one knows what is hidden under her sweet smile. She's the little devil! No one knows about her favorite activities and sadistic games. She keeps her personal slave at home and doesn't let him out of the house because she doesn't want to share. This is her personal game toy with which she will do whatever she wants. And today she it not in very good mood. No sympathy today! Only such games with the slave can relax her and pacify her anger.Morgana loves herself and her perfect body. She knows her worth and only few are worthy touch to her juicy ass, but today the slave will receive from this beautiful ass only torment.Tying the slave's hands and feet, the girl wants to interrupt the flow of air into his lungs. Her ass completely covers the face of the slave and blocks breathing. The slave is immobilized and has no way out. He Moos a little, and it only amuses the Lady. Â«Yes, come on louder, show how much it hurts! But I know you like it! Don't try to hide it from me!Â» After a while, she finally begins to torture. The body of a slave is tormented by her nails! Long and sharp nails leave red marks on his body. Ms. Morgana does everything to make the slave even more painful and presses her nails deeper and deeper, scratches him sharply and clearly hits the target. The slave can't breathe and gets hurt over and over again. The girl just uses the face of the slave as a pillow or furniture for her ass, it's very convenient. Now Morgan is happy and satisfied with your the devil inside, and left the slave in the roomÂ

It's almost lunch time and I have my slave waiting and ready to be punished. He's such a bitch and never shuts up. I have him bound and hooked up to the suspension cable. He's been there for quite a while. I approach him and place my foot on his head and face. My bitch knows what I can do with my beautiful feet, and he's about to enjoy the experience. I sit down and remove my shoes and begin to tease him with my feet, placing them over his mouth and face making him gasp as he tries to breathe. I tell him to open his mouth and I quickly put my foot to the back of his throat. His gasping now turns to that familiar gargle, as I push my foot to the back of his throat. As my slut begins to choke and foam at the mouth. I swing him around and continue to make him suffer. It's such a pleasant way to relax, and at the same time exercise my beautiful feet. Choke for me bitch...

I wrapped mynaked slave in foil and the loser lies helpless on the cot in front of me. I stroke and stimulate his cock, which is captured under the foil! This misserable loser jerks and trembles, even though he don't know what will come next. I press my big boobs in his mug, so that he can not breath anymore. This is rightful for this worthless jerk. He yammers while I take his breath away with my big sexy tits again and again.