108189 - VIDEO of SHIT for MASTURBATOR by Mistress Isabella

BEAUTIFULL clip with pissing, spitting, excellent shitting with a count down perfect for toilet masturbator, 22 minutes in italian language, you will love it also if you do not understand italian (but if you understand it is better for you)! Overknee high heels leather boots made in italy and wc chair! MP4

EASTCOAST ProDOMME : Endlessly your bank account transfers what rightfully belongs to me as I continuously tease and taunt you with my sexy latex. Look at that pink, it just pops out at you. Yup, pay up latex LOSER ha ha...

There is nothing better then being allowed to worship your perfect Princess. Ohh and did you already notice the shiny body that cover my Princess tits and ass?Keep watching, get lost, get consumed and start stroking that dick. Thank you Princess Kate over and over you are whispering my way while you get a drooling puppet. You beg for your orgasm but will you get it granted this time? After this you will be mine.

EASTCOAST ProDOMME : Ahhh the joys of a good old fashion FUCK YOU while lounging in my satin Asian robe & latex. You deserve nothing but the best of fucks while licking my chunky Gothic heels.

Once upon a time, many warriors fought for the infinite treasures scattered in the darkness of a terrible bathroom. In the midst of giant spiders and scattered bones everywhere, an ancient evil hid itself! It attacked the brave warriors and fearful travelers, turning them all into captives of their slaves! The spell of this demoness was very strong, she lured people with her gold ... from her ass! Excellent, big, incredibly smelling pieces of gold or what is it there? (They really became slaves in order to endlessly inhale the scent of fresh crap, and work with their mouths, lick her dirty ass? Um, well, what's next?) If someone tried to resist the animal magnetism of this bitch, immediately became a witness to devilish scat show with all the dirtiest action! Do you really want to experience her enchantment? Get ready this is really insane!

Yes we did it... sitting in the bathroom and pissing in front of eachother into our jeans ! Me and my beautiful friend Dominique Plastique... Enjoy this extreme hot shower from us - having fun in wet jeans 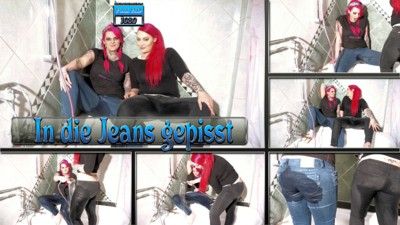 Do you wana join me in the toilet? I've eaten something really bad and I need a really big you know whatÂ. I had a bad curry last night, and as always my guts are chaos today. But you'll enjoy it won't you? You'll enjoy seeing me suffer with a burning asshole. This is my private time, and Im sharing it with you. What a lovely girl I am. GOD IT STINKS! Its making my eyes water. Stinks like rotten eggs. OHH The noises are disgusting aren't they? But music to your ears aren't they? You'd love to sniff my shltty ass wouldn't you? FEWWWW, im really emptying my guts for you in this clip!

Sadistic Cindy sits up with hers made tights sweaty on the face of Melady and coerce to inhale its smells and to die to this it. It must all the time listen to the worst verbal humiliations and insults about of Cindy.

CUCKOLD PARTY 4: BANANA BLOWJOB-ORGY ON THE WHITE COUCH Â THIS CLIP IS IN ENGLISH: Months ago slave Joschi was forced by MASTER HUMILIATOR Â THE WHITE PRINCE to lock up its tiny never inside dicklet into a chastity cage and hand over the key to THE MASTER. Now Joschi Shitface Â the 40 years old Virgin Loser is used to be totally humiliated by THE HUMILIATOR and FOUR ULTRA HOT BLONDES at a SUPER SADISTIC SEX-OTGYÂHAHAHASUPER KINKY GODDESS NICOLE, GORGEOUS LADY AMANDA AND BLONDE MEGA HOTTIE PRINCESS VICKY are humiliating the 40 years old Virgin Loser with bananas while ERICA is spoiling THE HUMILIATORÂ´S MIGHTY COCK on THE WHITE COUCH!THE CRUEL BLONDE BABES degrade the wimp Joschi Shitface tot he max beyond OUR wildest HUMILIATION DREAMS! AAAHHH! ABSOLUTELY GRRREAT!!!

Mistress Anfisa loves to be admired by you, but what she even loves more is playing little mind-fucking games with you. She knows exactly what you want. You canÂ´t keep yourself together when you see her hot nylon feet, can you? You would just love to smell them while you're looking at your beautiful Mistress. But don't be fooled by her angelic face and her sweet smile, she knows how to dominate her feet slaves!

Gothic sweaty Miss Elsi Spring ignores her foots lave while he has to clean her black gothic heels with his tongue. She hess to smell inside her shoes and to inhale the scent of her feet while she chats with a friend.

EASTCOAST ProDOMME : Sucking you in even further in my cute pink webbed nylons over my black gothic latex. The crack of my whip is not too far from your back and no one is going to stop me as I make you pay $$$ for my ancestors slavery LOL

ITALIAN SPOKENToday, I want to introduce the latest addition to my harem. He is still in training, since he doesnÂt have a significant experience as a slave and today I expect him to make a big step forward: for the first time he will be used as a toilet slave. You know, all my slave must be able to serve me as full toilet and this one is no exception. He is a silent guy and this is a good thing: a toilet doesnÂt need to speak. First, I put a funnel in his mouth and I make him drink my pee. He behaves well and drinks everything without any spill over. Now, he is ready for the big step: my shit. I squat over his face and, soon, his mouth is full with my fragrant and tasty shit. IÂm realistic and I donÂt expect that he can eat everything, being his first time, but I want him to get used to the smell and taste of my shit. Therefore, I push all the shit inside his mouth and I seal it with duct tape. He will stay there for one hour, while I make some phone calls.