PRINCESS SMILEY`S SOCKSNIFFING TORTURE!Princess Smiley comes home from jogging and finds her slave lying on the sofa. Outraged by this impudence that he has simply laid himself down on the sofa as a slave, she immediately rushes on him and makes him ready. She presses her sneakers on his chest and face and tells him to take off his sneakers. Then she forces him hard to smell the sneakers. Maskenjoe almost has to vomit, only with the greatest effort he can bear the sweat odor of their sneakers. But that's just the beginning of the smell-torture!The dominant pretty Princess pressed then her totally sweaty sock feet on his nose.And orders him to inhale the smell deeply. Maskenjoe has to endure the whole torture in the most disgusted way. Wherever he goes, her feet are always there in socks, on his face and nose. Finally, Princess Smiley throws him off the couch with the order to wash her sports clothes now.

Junky girl Tamara plans a game with Richie. He suspects nothing, has his hands tied up with handcuffs to himself and then shall put himself just on the ground. Tamara then comes over him. She tells him her cigarette into his mouth and he must smoke to this. She then starts to play with him and his randiness. But she suddenly then sticks Richie the mouth with an adhesive tape. Helplessly he lies there and Total what happens waits. Tamare then sits up, takes off themselves its shoes and lends him its feet on the face on the bed. With a sealed mouth which air gets he must now smell, breathe foot sweat at its brown nylon feet him yes no-one more. Then Tamara sits down on his belly again and it stretches hers feet directly on the nose. Die HÃ¤nde mit Handschellen gefesselt, den Mund zugeklebt, so ganz wehrlos liegt er da und muss ihr als Riech-Objekt dienen.With handcuffs tied up, the mouth sealed, he so quite defencelessly lies there and the hands must serve her as a smelling object.

Mary goes to kitchen with a plate of fruits. But instead of putting a banana deep in her mouth she lets it fall on the floor and drawns her bare toes in the soft banana flesh. MmmÂ yummy!

VIDEO IN ENGLISH!According to the Goddess Gloria wakes up in the morning, her house slave must immediately be Maskjoe for licking on the spot. You summon him and orders him to lick her pussy at once.

Lady B has many fun to crush many Food under her flat Flip Flops. She crushes noodle salad, Jogurts and Sausage. The floor is slippery form all the crushed Food and Lady B slide on they and has fun.

Richie must be with hands tied up at the back between Bianca's and Lena's feet; From the two sides the Hungarians push him their feet in stockings be a face stinking foot smell where the nose opposes into!

Lady Stefanie and I fucked our new slave at first and tested what he can endure. You are allowed to watch very closely in this clip how our feet will crush his balls.

I called this video 'Sock Bully' because Sasara refused to do a facesitting shoot unless I smelled her socks first. Her socks look cute, but don't let looks fool you. She Obviously planned this video in advance because the smell of her socks were overpowering. She knows very well I do not like socks, and I hate bare feet. Refusing to do a facesitting shoot until I smelled her feet was simply bullying me in real life. Worst part is she loved every second of it! She loved seeing my reactions to the smell, the faces I made, and the scared look on my face, she loved everything about the shoot!"I like seeing you suffer" Sasara says with a huge smirk as she buries my face beneath her feet. "Just a bit more, until you pass ___ from the smell of my socks haha" she adds which may have very well happened because her foot was stepping on my esophogus while the other covered my mouth and nose.After I black out and come to, Sasara wants a 'footsie' (selfie of me with her feet on my face) as a final souvenir for her to take home.'SASARA'S EDITION' INCLUDES AN EXTRA ANGLE 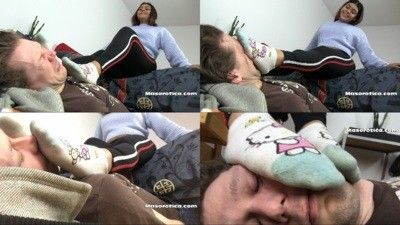 Aggressive Sock Smelling Terror!Sadistic Princess Nicole and Teasing Princess Scarlet are return from a shopping trip. Her slave is kneeling waiting in the room. Immediately they order Maskenjoe and use him as a doormat and footstool. They strip their dirty sneakers on him and verbally humiliate him. Princess Nicole then gets the idea to torture him with the tape. They close Maskenjoe's mouth and order him to smell her shoes. Sadistic Princess Nicole tells him that there are definitely duck shit on her shoes because they went through there. The two young dominant girls make fun of him and let him smell extensively on their worn sneakers. Then they order him to take off their shoes and smell their sweaty feet. They press his soft socks on his face and humiliate him to sniff. As much as Maskenjoe is disgusted by her sweaty socks and feet he still has to obey her orders. Then Sadstic Nicole has another nice game. With closed eyes Maskenjoe has to guess which shoe he is smelling. For every wrong answer it immediately sets a foot slap. And of course, the stupid slave provides only wrong answers!Afterwards Maskenjoe has to lick both of them with their sweat. The two very beautiful blond mistresses mock him, laugh at him and insult him while they press his sweaty socks and feet to inhale on his nose.Nicole spits him vigorously in the face to say goodbye.

Joschi Shitface must be the total sweaty feet of Goddess Gloria smell. the dominant Mistress jacks off her stockinged, sweaty feet,put into his face and orders him to inhale. In between, he has to smell strongly also on their shoes.

My slave lies in bed and dreams. Of what? He dreams of me, of course! I will fullfill his dream. I wake him up roughly becuase I want to stand on his face, take his breath away and I want to stomp on him. That is so much better than any dream, isnÂ´t it?

Richie gets a little training as Feetslave. Feet his mistress wall takes him with the cord, this one is fastened to his collar and presses her naked ones for him to this smell on the nose. He must sniff at it deeply, absorb the smell with his nose between her toes.

The vampire-style Lady Morgana has Bobby trained her Feetslave. When she enters the room he must always zunÃ¼chst dne knees with his head down waiting for their orders. And also this time. The nobless mistress sits on the couch and tells him to remove her boots. Then they glued his mouth with masking tape to make him breathe for his impending martyrdom-foot-smelling air to. Immediately she pushes him even her foot into his face and orders him to "smell it". Bobby then alternately gets her brown stockinged feet to smell on the nose. The scent of her sweaty nylon feet, directly from the boots, can Bobby remember that they must have already been out in it all day.

FOOTMAT OF THE DOMINANT NYLON TWINS!Foot slave Bobby must serve the dominant young sisters as a mat under their feet. he is fixed with handcuffs and musr lie under they nylon legs and serve them for amusement. The sexy teen twins push their sweaty nylon feet to smelling on his face and Bobby has to inhale all the time.

The dominant young Spaniard Loretta lies in black, classic nylons on the couch and orders hers Feetslaves Richie: "Smells my feet!". during Richie almost true to life by the hitting soft Stockings and her tattooing gazes at her feet in admiration, takes her foot smell by the fine nylon fabric simultaneously he.

SWEATY SMELLING TORTURE OF MISTRESS LYNNA!The blonde super sexy lady comes back from her shopping trip and is pretty exhausted and annoyed. Especially her feet have suffered a lot. The whole time in the shoes they have been sweating properly. All this is to get her slave to feel. Bobby kneels submissively at home all the time. When his mistress comes now he must crawl immediately for foot services.He should take off Mistress Lynna's shoes and smell strong on her feet. The dominant beauty makes him verbal all the time and orders him to smell louder and more intense. To deeply inhale the smell of her stockinged sweaty feet.But her armpits should not be neglected either. There she also sweat well. She presses Bobby's head firmly in her armpits, so that inhaled her smell of sweat deep.

You're coming on a little journey with me throughout the house. My hay fever is really bad today. Excuse me! I was in the garden yesterday, pressure washing the patio. In fact I'll show you after I put on a dressing gown. I'm not really dressed for going outside. Okay... one sec... there! Oh, damn! It's been raining! Look down there. That's where I pressure washed. It actually looked better before I did it. Well, never... fucking... mind. Let's go back inside. Would you like me to kiss you? mmm! Do you know? I'm hungry. Wonder what I've got. Oh, I could make some pasta! Yes. Okay, I'll get that started and then we can go into the living room and chat. And kiss.

Loretta has trained Richie to her Richie slave. She ties up his hands at the back with handcuffs and sticks to so that he can his mouth with an adhesive tape smells also no more with this by the air breathe in. She then slips from this one of her shoes and already presses her naked foot on his face, too. She pinches his nose between her toes and forces for him so, this one has accumulated between this over days, to smell out the foot sweat. Her second then befits be based to this, too. Richie can breathe nothing more in by the sealed mouth and only pumps out the smell of her forgotten feet into his down lungs. And really Loretta enjoys this! Forcing Richie to smell her forgotten feet.

Feet Worship after coming home!Slave Maskenjoe was out as a dog with his mistress and now, as they come home, immediately he take over the next role: foot slave.He should first the stockinged feet of his mistress Princess Smiley fresh from the sneakers smell and then kiss and lick them.