Are you willing to do the most disgusting things for your goddess? Today I construct something very disgusting and nasty for such a loser like you are! First you will jerk your dick stone-hard, but woe if you come! Then you will follow my hot instructions and do all the disgusting things your hot and filthy goddess tell you to do! While you do all this nasty things you are allowed to worship your godesses hot bosy, because I will give you some insights. Only after you managed all the exercices of my dusdust-training successful, you are allowed to come to the climax and then you will get a hot reward on top!

Day light, hot in the city, two fancy girls are ready to go on the day party. Before they go to dance, they need some warm up. Teodora and Misty called their slave boy to fulfil their needs. Real foot domination.

Mistress Giorgia has a lot of fun to shoot pedal pumping videosThe Mistress orders the slave to film it while driving, to film well her feet when she breaks the engine between various despots and accelerates. During the video to the Mistress runs off the pee.... What a better occasion to enter with the slave into a grove and serve during the physiological needs of the Mistress.....A good, abundant piss, and then we restart in very speed mode!!!

Christin and Lady B crushes many Cd with Covers under her high heels. Christin is wearing Pump with a sharp meatl heel, Lady B her Buffalo Boots. Christin stomp the CDs so hard, her metal Heels is crooked.

I know about your dreams my little boy! Your biggest wish is to call me your girlfriend or even your wife. You would really love to be closer to me and to live out your fanasys. But that, you little loser, will always be your fantasy! Because without paiing you will never be allowed to come closer! I love to show you what you miss and who knows...if you take great pains and pay much..maybe you get a bit more back from me...

My slaveâs now degraded to be my boot licker. I want him to lick my boots clean completely - I want to wear them to a party and of course I want them clean for the party! To make it perfect heâll also clean the soles completely!

Time for a polish change, from my pretty pink toes to my eye catching vibrant orange, NYC spring steet polish. Hope you enjoy seeing me wiggle my toes and paint them a fresh new color all ready to be worshipped ;)~toe kisses ~~ 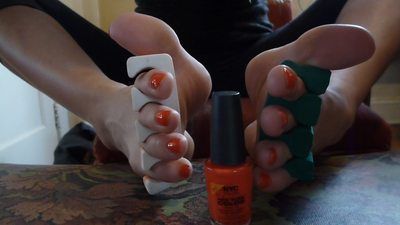 82814 - Old Man Intruder Punished by Being Fed with Puke!

A man makes a huge mistake of intruding the house of two dominatrix because after he gets caught, he is not brought to the authorities, instead, he is exposed to an unpleasant fate! He has to strip off his clothes and then lie down on the floor! Then, without warning, they take turns puking on his face! When they could no longer release more vomit, they gather the mess that they have made and then put it inside a bowl! After which, they serve everything inside the victimâs mouth! While he is being fed with puke, one of the sweethearts takes the opportunity to add more flavor to the concoction by pissing on his face! Eventually, the victim is laid on his chest on the floor with the bowl in front of him. The only time he is allowed to leave is after he devours everything that is inside of it!

It's time for a buffalo worship and my buffalo boy has to do it bondage style... so he can enjoy my buffed feet even more! Well... coming home from work late results in bondage, you know ;) 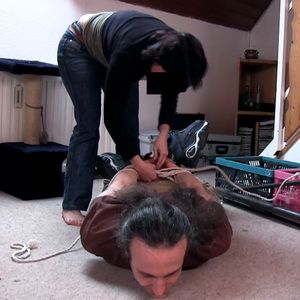 After the slave took the last high heel trampling quite well I wanted to try out how far I can push it â¦ and brought along my high heels with thin pure metal heels :-D Once I step on him heâs in great pain right away as the thin heels go deep into his stomach and chest - and I just love how each step leaves behind a perfect round mark on his skin! I continue to brutally trample him and even jump on him a few times while cruelly smiling down on him.

Who can resist the colorful tights? And even three. I can not. Slave neither. Teodora, Sonny and Daria give him the pleasures of their bodies and make us all happy. Teodora and Daria, right from gym, continue to practice their legs on the slave. Scissor fight.

RP- I met a Local gamer on Xbox live who talked SHT the ENTIRE match. My team sucked so of course we lost, so I challenged this bitch to a game of 1v1. Winner gets to do as they choose with the loser. Being a girl I'm sure he thought he'd have an easy win. HAHA Wrong. If he won? He got to fuck me. If I won? I got to use his face for my gaming chair for an ENTIRE night. Of course he lost. As easy as it was he probably was wanting me to win on purpose. I mean who doesn't want a hot girl to sit on their face? Right? Well, it wasn't that simple. I gave him my address and made sure to wear something sexy to get him to do whatever I wanted. He shows up and I immediately dragged him to my TV and began wrapping him TIGHTLY head to toe. Do you really need to tie me up? .. Yes, I wouldn't want you changing your mind and messing me up while I play.. (I had more planned than just using his face for my chair.. As much sht as he talked.. I was going to make him SMELL all the sht he was talking.. I held in EVERY single fart ALL day and LOADED up on plenty of milk and protein shakes.. building up the WORST stomach cramps just to make sure he got every bit of the punishment he deserved)... Unable to move a muscle I dropped him to the floor.. You ready to smell my ass?! .. Haha and I dropped my ass right on his face and started playing, letting him get ZERO AIR and then keeping his nose tight in my crack when I allowed him to breathe... Forcing him to suck every ounce of air against my sweaty butthole, he probably didn't plan on me not washing my ass since that win to make it even worse on him. MMMF... Yeah, I KNOW hes regretting this bet now.. Hahaa.. Good, bitch. Talking all that sht.. now he can smell it.. I heard my stomach start to rumble and I'm sure he did too.. Oh god.. these are gonna be wet.. PRRRTTTTTT .. A burning hot blast splatted against my panties, definitely ALOT more than just a fart.. right against his nose.. he sucked for air through the filthy fabric and fought against his tight cocoon.. Hahaha. Hows all that sht now? You were talking it, and now its right up against your helpless little bitch nose. But wait.. let me remove these panties before they get ruined.. being theyre my favorite pair and all.. that I have 4 of.. I'm totally not doing this to make sure it all goes in your nose.. PPFFFFRRTTTTT... A long chunky sounding blast filled his right nostril.. OOPS! .. he struggled in panic.. desperate to breathe any ounce of fresh air only to be assaulted over and over and over by my raunchy ass before having his nose sealed straight back in my crack... tightly against my ass. I felt him sucking against it in a state of panic so I leaned up just enough to rip another blast.. then slammed right back down. Hahah, theres your air bitch.-------Before long I grew bored of playing and took his punishment up a notch, turning forward with his nose in my pussy I ordered his mouth open and pressed my ass right into it. Looking into his eyes as he smothered helplessly, craving any sort of air and just smiled at him as I pushed some air right into his cheeks. With nowhere to go, all the gas started to force its way down his throat. I could see tears in his eyes... Maybe he'll think twice before he decides to fuck with another gamer girl.================================================================= TWO Camera Angles/Forward & Reverse Long & Brutal Smothering with WET farts for air.Category: FARTING

Lady B get a large collection with expensive MÃ¤rklin Train, Rail, and more, from a Fan. He wants see all this stuff crushed under sweet ankle Boots and in the shredder from Lady B. Lady B show you all this stuff, crush it under her Boots and plug the completely collection in her cruel mashine. Only trash gets out from her shredder. Over 600 Dollar are crushed.

What to do with buffalo boys ? I let them worship my buffaloed feet - and sometimes they even get to lick my feet! They don't deserve any better while I enjoy a nice cigarette. 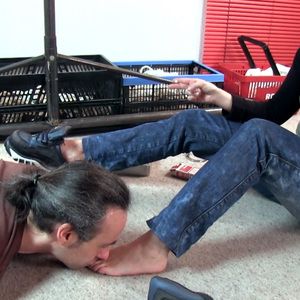 Here I was as a domina in a dominastudio and a slave had to serve me devot. At first I gave the slaves a face fitting. Then I pissed him a fat load piss in his slave mouth. That was so much that the slave coughed and part of my divine piss landed on the ground. So the slave had to lick the floor clean. Since part of my piss also landed on my domina boots he must still lick my domina boots clean,too. You can see all this from 3 camera shots. Especially the horny scenes where I filles up the slave with my piss extremely!

I wanted to crush these fruits under my sexy high heels - but I'm not going to flatten them today - I'm going to crush them through the metal gutter. I've also placed a second camera on the ground so you can see the mess getting pushed through the gutter. One after another each fruit meets the crushing power of my shoes and my full weight - and in the end there's just a huge mess left!

Lady Samantha dominates her leashed slave under her Blue Jeans High Heels . She teases him with her dangerous Heels and she orders him to lick it. He has to worship the Shoes, he has to lick the soles after she chocks him with her sexy shoes.

Imagine just being by my precious side kissing each ass cheek while begging to give me all your money. You are weakened by my perfect precious beauty. You are addicted by chocolate....