As I walk on the street next to the stable, I crush a lot of small things under the soles of my riding boots carelessly - some walnuts, small tomatoes and even some tangerines get flattened under the hard boot soles. As I walk further and further there's a small frog made of metal in my way - and it gets crushed as well. I approach a parking lot and notice there are even more of them on the ground. Obviously, I can't resist - I've to crush them all! They're quite hard, but they're not hard enough to withstand the hard boot soles and the power of my legs. One after another is crushed completely before I continue my walk! This is a non-exclusive custom clip for a fan. If you want me to do a custom clip for you, send me an email to marissa@madamemarissa.com!

You've been waiting for your girlfriend to go to bed just so you can stay up and jerk over my huge KK cup big fake tits. You're fucking her less and less often because you'd rather stay up all night and jerk to massive fucking tits. Her tits will never look as good as mine, you don't even want to fuck her anymore with those itty bitty titties! Jerking to my massive fake tits is so much more satisfying.

We placed a camera on a tripod above our friendÃ¢ÂÂs head. The camera is filming his stomach. The girls are wearing high-heels and walking in circles, one after the other. They are supposed to walk all over him and in all, they walked on him 269 times! At the end of the film, there is a shot of how his stomach looked the following day. Time: 8.06 min. 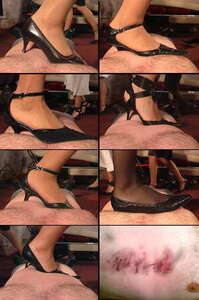 You love the sight of my long sexy legs, don't you, slave? Especially when they're clad in nylons! And I know there's something you get even weaker for ... my feet in nylons! Should I take off my high heels, so you can admire my nylon feet in all their glory?! Maybe I'll even let you smell them ... I know the sight and smell of my nylons makes you completely will-less - you'll do anything I ask for! You know how weak you are little foot slave ... give in to your fate ... accept your weakness and become my obedient servant!

Being my slave is a privilege only for successful losers! Extreme Greedy FinDom with a Russian accent really drains your wallet. And you will get nothing in return for an expensive price. Eyeglasses Long Blonde Hair Findom & Verbal Humiliatrix. There is nothing more pity than paying money for nothing. Paying much money gives you more JOI than Femdom.Hmm... You know... that my money slave can be horny only with a purpose. I allow my slave to stroke only with a purpose. The purpose is to serve FinDom Goaldigger. The purpose of my money slave is to tribute me every time when you are getting hard from photos or videos of FinDom Goaldigger. And when you cum - you tribute me even more. I am taking the control of your wallet and of your dick. The best purpose for money slave of Superior goddess FinDom Goaldigger is to send all your money to her. FinDom Goaldigger is the most strict and greedy findom in the world. She is very different from others. It is very expensive to serve her. Because serving her cost much more money. It is like comparing 2 phones iPhone and Nokia. Findom Goaldigger's attention to pathetic you cost as much as iPhone. In this clip, you will know more about the difference between FinDom Goaldigger and another cheaps. Serving FinDom Goaldigger is a real privilege only for successful losers!ÃÂ

ITALIAN SPEAKINGCUSTOM REQUEST - Mistress, It's been a long time since I asked you for a giantess crush video.I would like a video of about ten minutes long. Wearing open sandals with heels, and enameled nails. You crush a small plush toy to the ground, and treating it as a useless man. I'll leave you to use your usual excellence with the script. As you know, I like that you tell me you'll crush me and step on me. Also, stamp on my head..

Goddess Sheila: My beach shoes are dusty and have to be licked clean by a foot slave. The foot slave has to lie at my feet and I use his tongue as a washcloth for my dirty flip flops. I rub my soles over his tongue and clean my beach shoes. He also has to lick the insole of my flip flops. He has to swallow the mix of dust and foot sweat without objections.

Right, left, right, left... this is how the two mistresses give him a few juicy slaps to the face! But there's more to the plan that that. Mistress Jane and Mistress Zora bring him down and sit with their jeans asses in the middle of his face. Now it becomes even harder for the slave. With the asses of his mistresses on his face he is subject to a strict breathing ban. While one mistress sits on his face he is tortured by the other mistress. Repeat the slogan: It always can get worse!

Because itÂ´s sweet and hot !!! Me in this cute panty !!... And yeeeesssssss you want to see that clip and you want to pay for that clip !!! Worship my ass, worship me and lose your fucking mind, loser !! To pay me is like sex for you... you are just a human ATM and fuck yes, you love it !!

If this pony wants to become part of my ******, he must learn to recognize my scent. I approach him holding a wand in my hand. I see in his eyes the fear of being hit. But I don't want to use it to punish, but as a tool to keep my panties always in front of his face. And so I do. I remove them, put them in my wand and like a donkey with a carrot he paws all over the room obediently. I don't know if it excites him more to smell or feel my nakedness resting on his back. This pony was good ... he supported my weight, stood up on two legs and now he can recognize my scent ... Now he is part of my ******.SEGUI IL MIO PROFUMO, PONYQuesto animale se vuol entrare a far parte della mia fattoria deve imparare a riconoscere il mio profumo. Mi avvicino a lui tenendo una bacchetta in mano. Leggo nei suoi occhi la paura di essere colpito. Ma non la voglio usare per punire, bensì come strumento per tenergli le mie mutandine sempre davanti al muso. E così faccio. Le sfilo, le infilo nella bacchetta e come un asino con la carota lui zampetta per tutta la stanza, obbediente. Non so se lo eccita di più annusare o sentire la mia nudità appoggiata sulla schiena. E' stato bravo questo pony... ha sorretto il mio peso, si è alzato su due zampe e ora sa riconoscere il mio profumo... Ora fa parte della mia fattoria.

Four girls in high-heels trample over two guys. The shoes are very nice. One is a classic pair of high-heels, two are laced-up around the ankle, and there is also a brown leather pair. The girls are having a lot of fun stepping on the guys, with music blaring in the background. Our friend Don Kichote loves challenges: he makes one girl stand on him in various positions. For instance, on his head, with her heel on his forehead, or on the neck, or in his ear. The rest of the girls take turns stepping on and off the other guy, and making him lick their soles and heels. A girl in brown shoes steps on the other guy. She makes him lick her heel and then puts the sole of her shoe on his lips. The girl in black high-heels tramples over Don Kichote, sticking her heels in his body really hard. Then she starts dancing on top of two guys. After she gets off, two more girls climb on. Time: 13.39 min. REMASTERED - movie from 2006.

You've been waiting for your girlfriend to go to bed just so you can stay up and jerk over my huge KK cup big fake tits. You're fucking her less and less often because you'd rather stay up all night and jerk to massive fucking tits. Her tits will never look as good as mine, you don't even want to fuck her anymore with those itty bitty titties! Jerking to my massive fake tits is so much more satisfying.

Three guys lie next to a wall. One of them is wearing a blanket so he won't get marks on his body. The girls - all in high-heels - walk over the guys one by one. All four of the girls are on top of the guys throughout the whole movie. They stomp on them, stick their heels into them, dance on them, and stand on their heads. Time: 10.00 min. Remastered - movie from 2007.

Our toilet is going to be punished this evening. He is going to eat two portions of shit from me and Lady Laura. A lot of perverted punishment, a lot of shit and verbal humiliations. At the end after our slave left alone with a huge pile of shit, which he must eat this evening.

Let me clean my spectacles before we begin. I want to be able to see you clearly. I think we both know why you're here. I see you at your desk. You've probably never experienced a forward, suggestive teacher, but it's my job to notice these things. I believe you have a foot fetish. Not only a foot fetish, but I believe you have a Birkenstock fetish. Am I right? You're not feeling uncomfortable now, are you? Perhaps you'd like to take a whiff. Go on. Take a really good sniff. It pleases you, doesn't it? Here... smell both of them. Yes, that's it. Now, touch yourself. Stroke your cock. It's interesting... you don't do what you're told during lessons, but now, you certainly do. Naughty -- very naughty! Bear with me for a moment while I make myself more comfortable. Are these the kind of panties you expected your teacher to be wearing? You like that, don't you? That's it, stroke your cock. Keep going.

ITALIAN SPEAKINGToday I'm with my beautiful Mistress friend in Milan, we have a couple of slave that need to prove themselves. We are going to see which one of them can most withstand the pain of our slaps. Of course we alternate between our slaves, making sure they can't escape the slapping intensity of our beautiful Sexy Hands of Pain...