Lady Samantha dominates her leashed slave under her Blue Jeans High Heels . She teases him with her dangerous Heels and she orders him to lick it. He has to worship the Shoes, he has to lick the soles after she chocks him with her sexy shoes. Lady Samantha takes off her jeans high heels and she dominates her leashed foots lave under her bare , sexy soles. She tramples him, she crushes his face and she wants him to worship, lick and kiss her bare feet !

Do you like a nice foot play where girl is rubbing oil on her pretty feet and enjoys your reactions? Then check this POV video where Anna uses a ton of oil to spread it all over her feet and legs, she's playing with her feet, massaging her soles and toes and teases you with her every move. She likes to be a naughty girl, she loves to tease and to arouse. You can see everything from close up and from great angles. You'll see how much Anna is enjoying her foot fetish model role and she'll definitely will turn you on and make you happy. She's already waiting for you...her feet are waiting too.

A man applies and immediately gets accepted for a job which he didnÂt bother to learn about. It is only upon arriving in the venue for his first day does her learn of the ill reality! He is brought to what seemed to be a studio where he is made to strip his clothes off! Once he is rendered naked, he is laid on the floor and a nude woman then enters! He thinks he is going to get some sexy time, but the sweetheart suddenly sits on his face and feeds him with her pussy! She spends a generous amount of time on it before getting off of him and securing a piece of cloth over his nose! She then positions herself on top of him again, only this time, she urinates directly into his mouth! With his nose covered, he has no choice but to breathe through his mouth, making it impossible for him to evade the stream of unending piss, consequently causing him to drink every last drop she is able to release!

In close-up you may worship little Fußfotze my feet, soles. And watch me as I slowly take off my socks.Get down on your knees, good buy the clip and immediately!A must for every foot cunt.

Albina looks uncertain, but her filming intention was very clear. SheÂs open-minded and easy-going after a year in modeling school (that she left), and though she doesnÂt look strong or sporty, she passes easy balloon (Mexican 14Â) B2P test successfully. Yes, she was quite surprised by my order to blow until it pops, but sheÂs definitely not a phobic. ÂI will tryÂ.

CUSTOM REQUEST - The slave is tied naked to a chair, his legs are spread apart. He is going to undergo an intense smother punishment and he is excited, yet afraid. Mistress Gaia arrives wearing stiletto heel boots and blacks gloves. She is also carrying and a plastic bag. Without hesitation she puts it on the slave's head squeezing and clasping her hands around his face. Immidiately the slave becomes breathless and begins to panic. Mistress Gaia smiles as she sees the desperation in the eyes of her victim. Of course she is sadistic foot crushes his cock and balls, while he struggles for air inside the plastick bag. Mistress then sits on the slaves legs and begins to caress his standing cock. The sadistic game game continues as Mistress Gaia teases her slut with her leather gloved hands stroking and pulling his cock. Eventually he is ready to cum. However, at the time of his ecstacy Mistress Gaia shows her sadistic pleasure and lets go his cock. He squeals in anguish as his uncontrolable cock pulses and throbs in his ruined orgasm...

ORDER:You have not showered in a couple of days and your as less than fresh. (Again start off wearing something sexy and show me your curves - I love them)Have me eat your pussy for a couple of minutes and then tell me it's time to eat your ripe asshole.Your ass can be as dirty as you like and gassy.Make your slave lick it clean. Be nasty with him.

You really want to see Lady Levana's hot jeans ass - don't you?! Her jeans are so tight, so sexy! She strokes sexy her ass - you'd like to do that too, wouldn't you? Worship her ass, kiss her ass! Come on... do it!

I have returned home and haven't found any gifts and tributes from you.So slave, you were very unbehaved slave and sure you will receive what you deserve , high kicking punishment!

I sit down at the kitchen counter and demand that the slave cleans my boots with his tongue - while I'm spitting down on the boots again and again! He has to lick away all of my spit - and the dirt from the boots obviously! From top to bottom he licks every inch of my boots - and the nice treaded soles as well of course!

So you dirty boys hit the goal and put me on cumdiet again! This is my first day of strugglening before I knew I will have to reset my challenge... Dirty whore is thirsty and can drink only body liquids! Enjoy 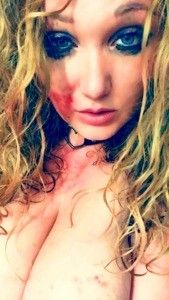 Anna is making living partially by pole dancing in real life, she loves to tease men, to show herself and to be desired. And she wanted to do a nice video for you guys, to tease you, give you kinda webcam-like experience, showing her feet and moving in a very sexy way to make you hard and all hot for her. She loves to see in man's face the desire and weakness for her and her feet. Anna is wearing high heels and a nice short dress and she'll maybe see what you would like the most. Ready for the surprise?

Unable to hold the need to take a piss, a sweetheart decides to settle with a wooden cubicle in the middle of nowhere! Inside, she proceeds to take off her panties and begin peeing on a small wooden opening on the floor! She releases a huge stream that took quite some time to stop! However, that isnÂt the end of it! Her stomach is acting up as well and she ends up following her pee with some wet poop! She release stream after stream, then later follows it with a huge lump!

2 Clips in 1. In both clips, a crazy Brazilian girl squats over a plate and pushes out a big shit. No audio in the first clip and music in the second clip.

This is the ass, that will drive you crazy - my really tasty jeans ass! You adore it regularly and youÂre already completely obedient to me. Yes, thatÂs right - I know about your little secret. I know what really turns you on. ItÂs my jeans ass that turns you on that massively - so watch closely and let my jeans ass drive you crazy. You just canÂt get enough of it! You canÂt deny your addiction to my ass!

I put this tiny girl under the soles of my Hunter boots with some zip ties and then start walking in the parking lot. There's an excavator nearby and of course I've to climb up on the tracks. With the hard metal below and my full weight coming down on her little body she's already suffering massively. Next I walk on a trail into the woods - literally dragging her through the dirt until I find a stinky pond in the woods - of course I've to get into the stinky mud and water - and back on the trail again! The little bitch looks pretty done already, but I've to walk back to the car ... somewhere on the way back the zip ties rip and I've to pick her up to carry her back to the car ... but her punishment isn't over yet ... no way I'm taking her with me into the car as dirty as she is ... I just put her behind the tire of my van ... get in and drive over her a couple of times until I'm sure she's done ;-) This is a non-exclusive custom clip for a fan. If you want me to do a custom clip for you contact me at marissa@madamemarissa.com!